If you disregard the physics of time actually 'stopping' and what that would mean, essentially the real question becomes: If you had 48 hours to do anything you wanted, what would you do? According to the answers in this r/AskReddit thread, people generally fall into two categories—those who would do crime and those who would prank as many people as possible. A handful of the busier redditors would love to just do nothing for once. We've collected some of the most amusing answers from this popular thread. It's hard to read through these without considering all the different possibilities, which makes for a pretty fun daydream session. 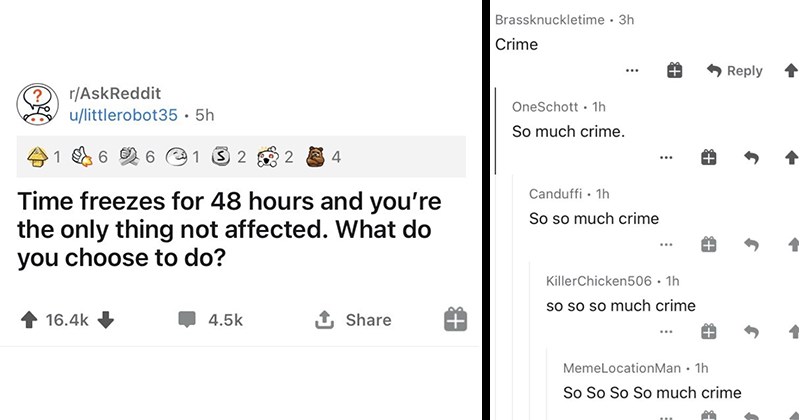 The entire world waiting on f***ing Nevada to reveal the fate of America literally might be the most 2020 thing of all time. The growing impatience is palpable all over social media and people are enduring the agonizing delay with the help of memes. At least we're all experts at entertaining ourselves through major historic events! We've put together some of the funniest posts about the sluggish Nevada election results. 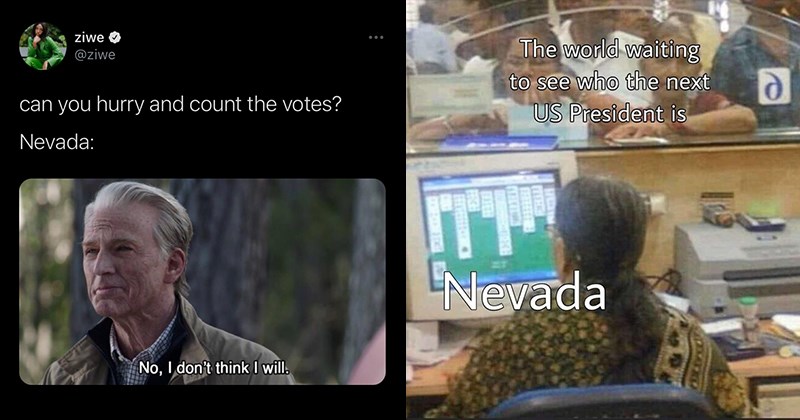 Americans Cope With A Demented Electoral Process Through Memes

Where are we? What day is it? Last night felt more like an entire week. America is still trapped in the dark void of election purgatory as votes continue to get counted in key states. It's been interesting to say the least. Despite record voter turnout numbers, the larger part of last night looked like a horse race between the two conspicuously unpopular candidates. As expected, Twitter has done a pretty good job of expressing its jaded feelings and exasperation for the whole process through glorious memes. We've picked out some of the funniest memes and tweets from last night. 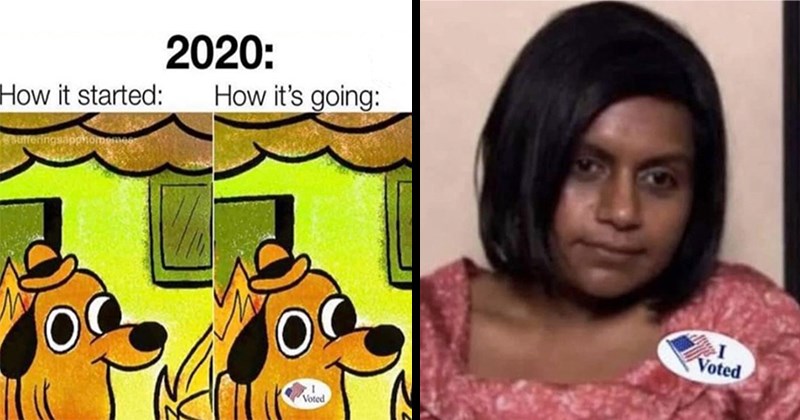 While these misspellings make us cringe to our cores, we also appreciate these oblivious souls for giving us some prime entertainment - and making us feel a little better about our own intellectual capabilities. Enjoy! 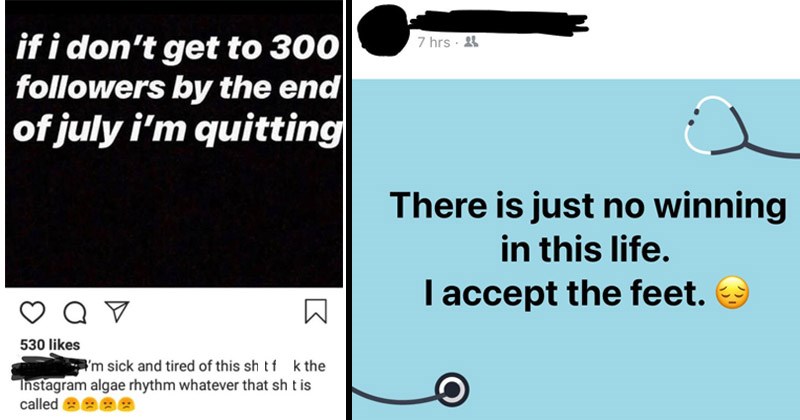 Facebook is a well-oiled machine of countless echo-chambers that rarely interact with each other. Thanks to subreddits like r/insanepeoplefacebook, we can glimpse into various Facebook worlds where volcanoes are a hoax, DIY pet cremation is a thing, and Trump can literally impregnate women through their dreams. We've got a disconcerting batch of posts full of nonsense and cringe for the brave souls out there. 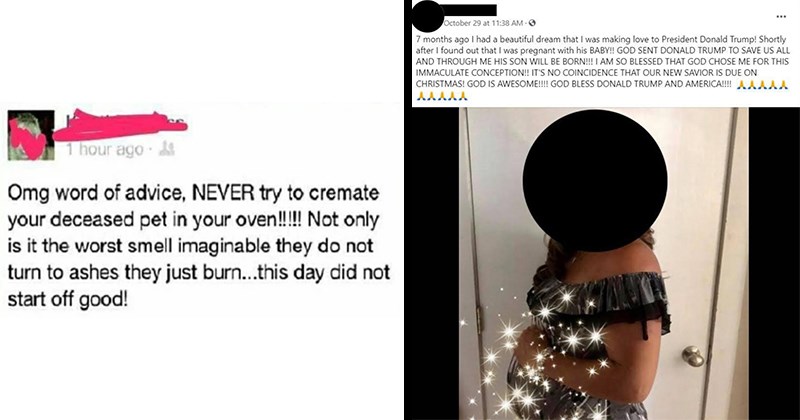 What is it with Nice Guystm and role-playing? This should go without saying, but we don't like that sh*t, so although this might seem harsh, we're doing you a service here. Dudes, if you're reading this, we hate that we have to remind you not to do this, but here we are. 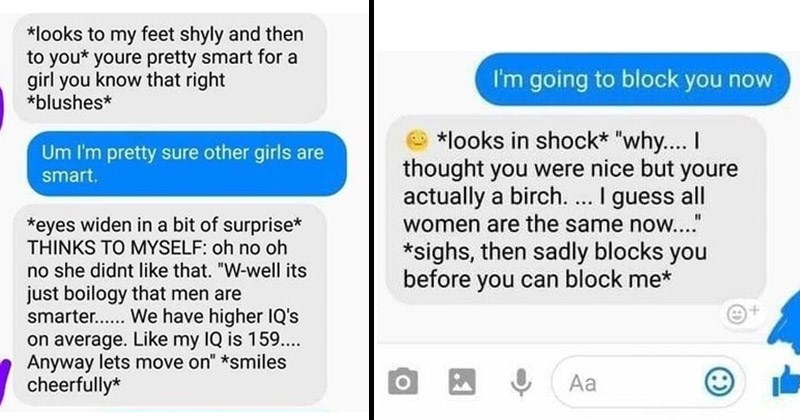 This week in surreal 2020 headlines: Russian meat mogul Vladimir 'Sausage King' Marugov was found dead in his Moscow home early Monday morning after intruders invaded Sausage King's sauna, tied him and his partner up, demanded cash, and shot him with a crossbow. The woman managed to flee and call for help, though the assailants escaped in a getaway car before the police arrived.

As soon as word of the Sausage King butchery hit the front-pages, Twitter erupted with meat puns, hypothetical 2020 bingo card quips, and tongue-in-cheek speculations about the possible involvement of fictional Ferris Bueller character Abe Froman, Sausage King of Chicago. We've put together some of the funniest reactions to the bizarre Russian headline. 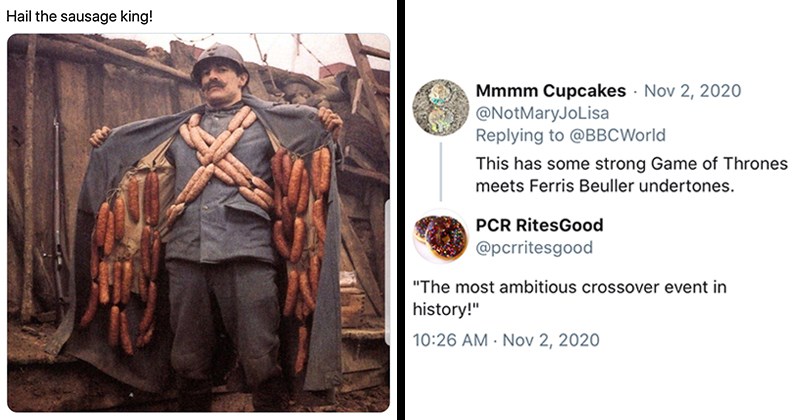 It's time for another round of recent tweets from the casual comedy talents of Twitter. We're always impressed by the rate at which people can churn out the jokes everyday—it's like their brains are highly efficient machines spitting out joke after joke onto a conveyor belt being fed right into Twitter. Damn. Enjoy these pleasant zingers and may they brighten your day. 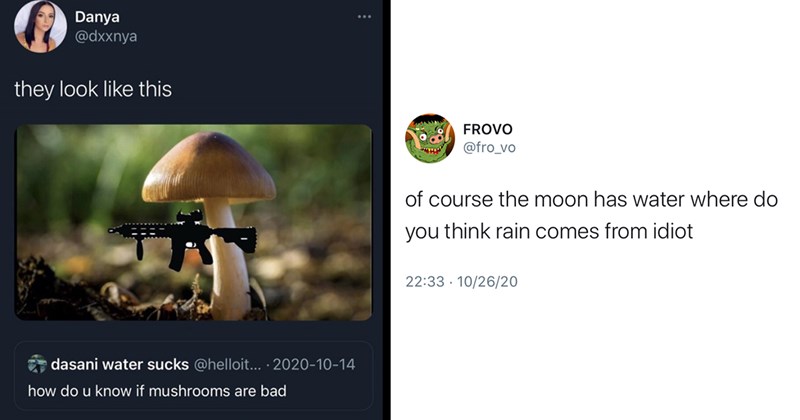 Kanye Gave Kim A Holographic Deepfake Of Her Late Father

Remember the time Kanye kidnapped Kenny G and had him perform in the middle of a room full of roses as a Valentine's gift to Kim Kardashian? Well, we didn't think it was possible, but he really one-upped himself with his latest stunt. At Kim's extravagant birthday getaway on some private island, Kanye arranged a simulated reunion with her dead dad. Yup. Kim and her sisters were led into a dark room to greet a holographic deepfake of Robert Kardashian doing a (totally human) little dance and delivering a bizarre monologue from heaven about how much he misses the family and what a genius Kanye West is.

Almost immediately after Kim tweeted a video of the hologram, Twitter predictably exploded with jokes and bewilderment. You'd think that by now we'd all be immune to bizarre and outrageous cultural events, but man, this demented year keeps delivering the weirdness at an impressive rate. We've put together some of the best Twitter reactions to the garish birthday gift. 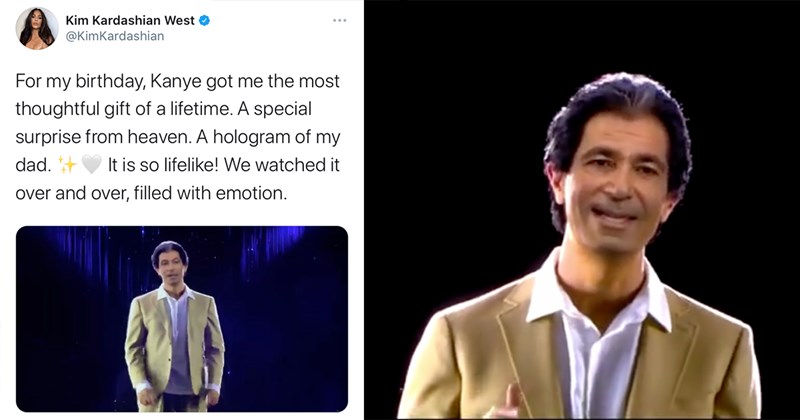 What is going on with these politicians? They're beginning to make the art of parody futile with these recurring shows of madness. Last month, former Governor of Alaska Sarah Palin posted a home video in which she calls out Senator Lisa Murkowski for not supporting President Trump's decision to nominate a Supreme Court justice. Sounds simple enough, but the clip itself takes some effort to decipher. The video starts with the words 'Dear Lisa' superimposed over Palin as she says, "Lisa Murkowski, this is my house." She continues to exclaim "this is my house" several more times, as if she was trying out different cadences but forgot to exclude the outtakes. The whole thing was shot and edited like a Godard film—jump cuts in the middle of sentences, sudden closeups in black and white, dutch angles with debris in the middle of the frame—you have to wonder if calling out Murkowski was just Palin's excuse to come out as an avant garde filmmaker. And then there's her performance, which is really something else. Forget Tina Fey—imagine Conner O'Malley playing Sarah Palin. At the end of the video, she points out into the distance and says, "I can see a lot of things from my house...Lisa, I can see 2022 from my house." Was this both a vague threat to challenge Murkowski's senate seat and a reference to the infamous 'I can see Russia from my house' 2008 SNL gag?

The video Palin initially posted to her personal Instagram account was mostly seen by her followers and supporters, and so for the first few weeks it slipped under the radar, but a shorter version was recently shared on Twitter to a much wider audience. We've included the short version of the video, some amusing replies from one Twitter thread, and the original Instagram video posted by Sarah Palin. 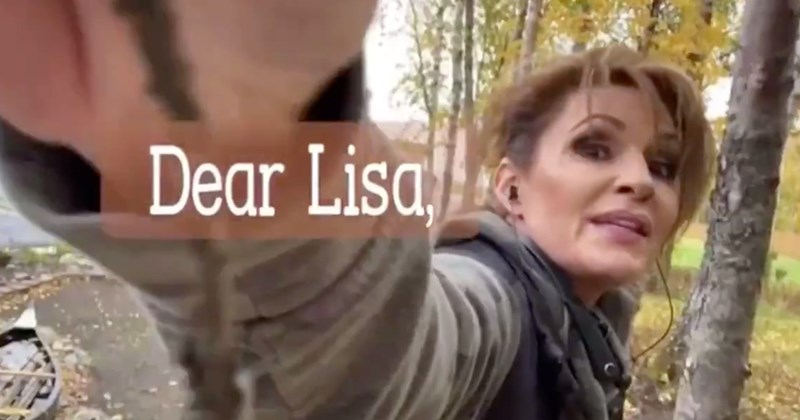 It's been a big week for creepy old men who like to whip it out. Jeffrey Toobin is probably sighing in relief right now as Twitter explodes over 'Borat 2' spoilers. The eyebrow-raising scene in question involves an awkward hotel room meeting between former mayor of New York City Rudy Giuliani and an actress playing Borat's 15-year-old daughter. In some leaked stills from the scene, Giuliani is seen lying on a bed with his hand down his pants as he peers at the 24-year-old actress, at which point Borat apparently bursts into the room and says: "She's 15. She's too old for you."

The film will be released to the public on Friday, but that hasn't stopped Twitter from churning out pre-emptive hot takes and memes based on the outrageous still images. Giuliani was quick to tweet about the incident and deny any wrongdoing, which only spurred even more spicy responses. Thanks for another batshit week for the internet, 2020. 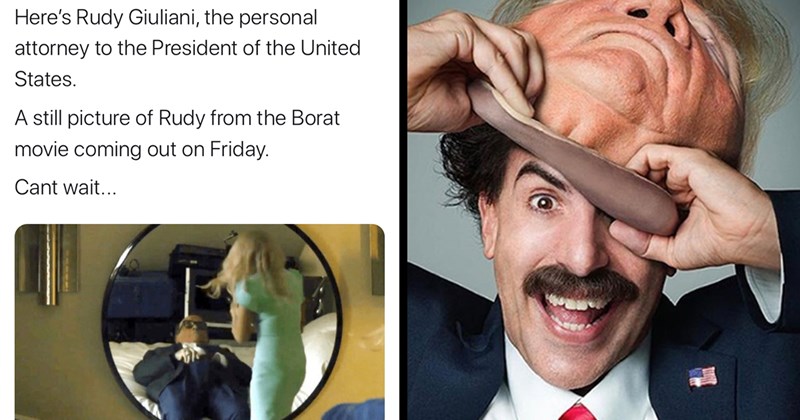 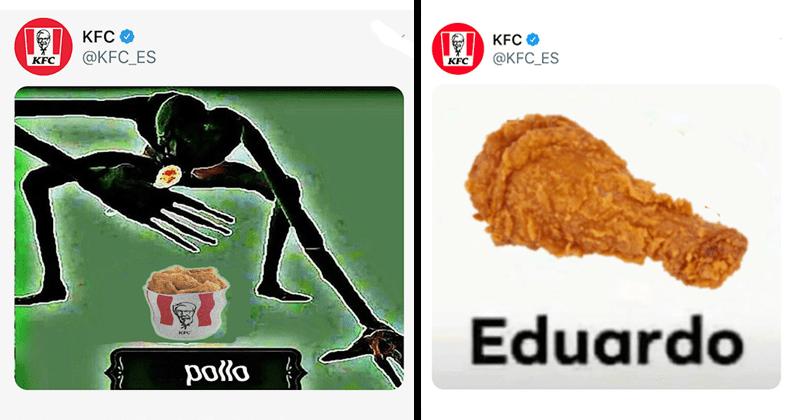 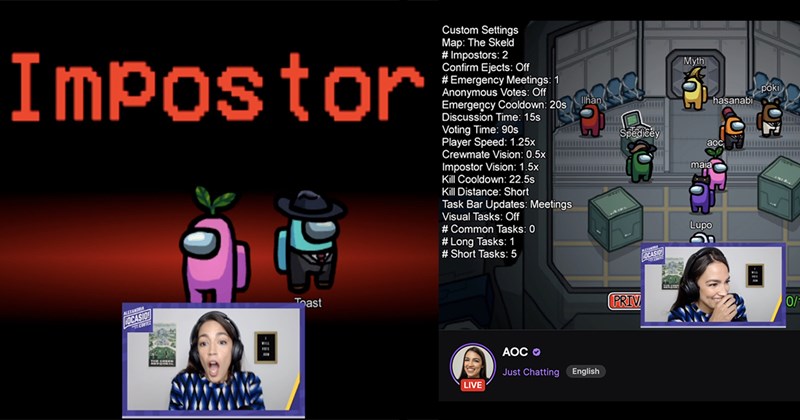 Memes That Roast The Attention-Seeking Ways Of YouTubers

We all know that YouTube vloggers have histrionic tendencies, but these memes really take it to the next level. We need more. 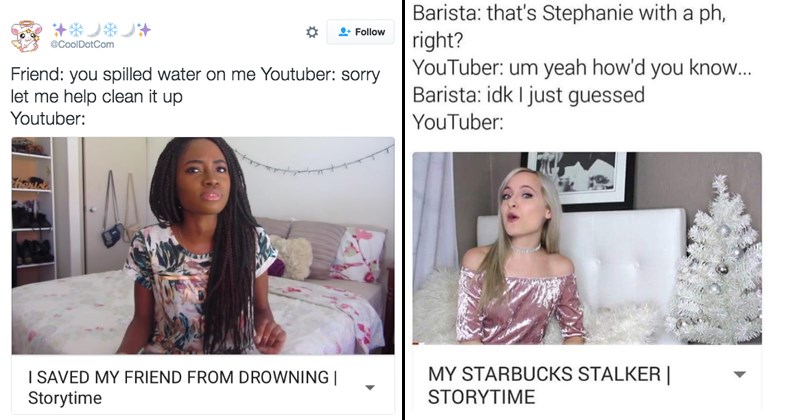 We're here to give the elderly some serious props for trying to figure out technology. But sometimes (often) they fail. And it's so, so, so, entertaining. This may sound like some light bullying, but we are coming from a place of utmost respect, a place of undying appreciation for their ability to accidentally create the kind of wholesome content that the rest of us just need. 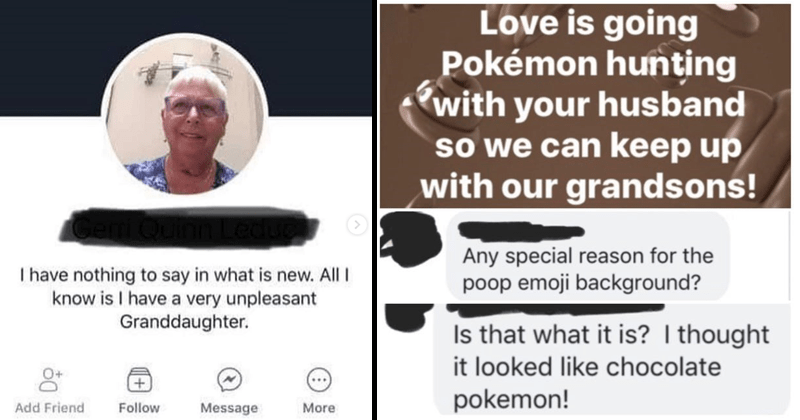 If you spend way too much time on the internet like we do, you've probably heard about the 'flat earth' theory, but what do you know about dinosaur earth? Two years ago, an Instagram account called @dinosaurearth began posting memes that satirize the flat earth mindset and they've been going hard ever since. The concept is reminiscent of the first well-known internet trolls of belief systems, the Church of the Flying Spaghetti Monster. The 'Dinosaur Earth Society' also have a Twitter account, where they often flaunt their rivalry with @FlatEarthOrg. As meme savants, we have deep respect for @dinosaurearth's dedication to throwing their spin on nearly every meme format in existence. We've put together twenty-one of the funniest @dinosaurearth posts for the (dinosaur) world to see. 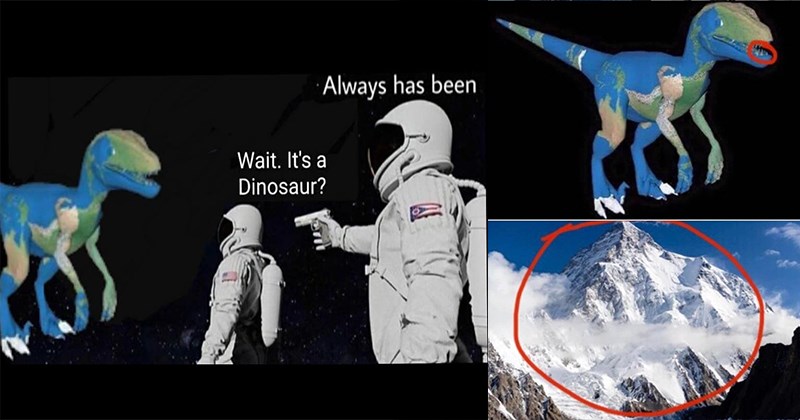 46 Comically Dark Memes Because Everything Is Terrible