Too many people seem to assume that lying on the internet from behind the comfort of a keyboard somehow protects them from getting caught spreading BS. On the contrary, it only takes a few clicks to debunk some sus information, and thanks to reverse image search, it's pretty hard to get away with taking credit for an image just for the upvotes. Egregious liars are extremely cringe, but there is a silver lining—we get to experience the satisfaction of watching these dumbasses get called out. We've collected some brutal screenshots exposing internet liars and their brazen BS. 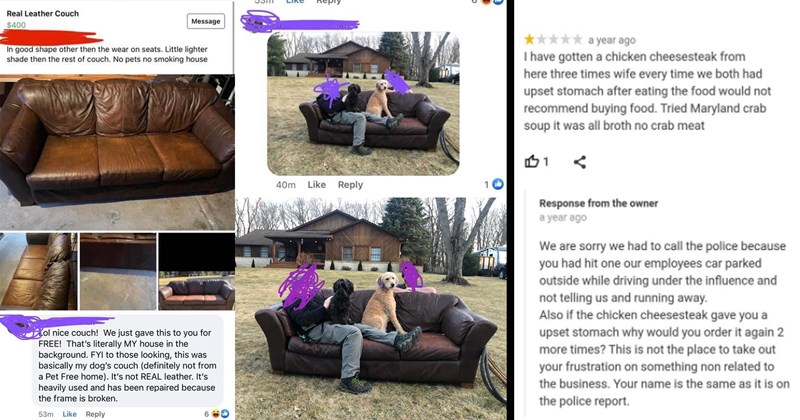 As millennials and zoomers abandon Facebook for younger and hipper apps such as Instagram and TikTok, the Zuckerberg site is quickly becoming a soapbox for baby boomers and the silent generation. They are out there sharing death announcements on gleeful, happy posts, or worse - posts that for some reason show off dirty nails or a picture of a well-manicured lawn. They are using the site's happy banner and avatar features to share bad news or frustration. And, as has pretty much always been the case, they are sharing many, many mysterious non sequiturs that they absolutely refuse to explain.

While it may seem like we are cruelly mocking these well-meaning Facebook users, that could not be any farther from the truth. We actually find their eagerness to share their feelings with the world to be sweet and wholesome. We also find their dedication to staying current to be admirable. While it's generally more fun to spot a clueless boomer-post in the wild, there are some excellent internet destinations that take great care in collecting these amusing social media moments.

The first of our favorite sources lives on Reddit, a place we have yet to see the elderly flexing their keyboard skills. The subreddit r/oldpeoplefacebook is exactly what it sounds like - an absolute mecca of disjointed posts from older folks who have yet to get the hang of the site. The community has been around since February 2013, and has amassed an impressive 1 million members in the eight years since its inception. This staggering membership really comes as no surprise - a lot of people have Facebook, and a lot of people know old people. While most of the submissions stay very true to the Facebook theme, there are a few amusing texts from elderly grandparents and nonsensical DMs thrown into the mix for good measure.

The Facebook group "Please show to Jim ! ! HA ! ! HA ! !" is another wonderful place to take in the utter majesty of geriatrics on social media. While browsing the contributions of the group requires actually logging into the cursed site, we think it's well worth the sacrifice. This group is a little more varied in its offerings than r/oldpeoplefacebook. The group, which requires an invitation or a membership application, includes everything from amusing product reviews to actual letters (composed on a computer) and YouTube comments. While this group was created three years after their Reddit competitor, its members post a lot, which is convenient for very bored people who need to be on Facebook for work. We've put together some quality old-person-posts from both of the groups for your easy enjoyment, but we implore you to join and get in on the fun yourself. This kind of content doesn't last forever. Soon, the old people on the internet will have been using it for years. And things will probably be a lot less fun. 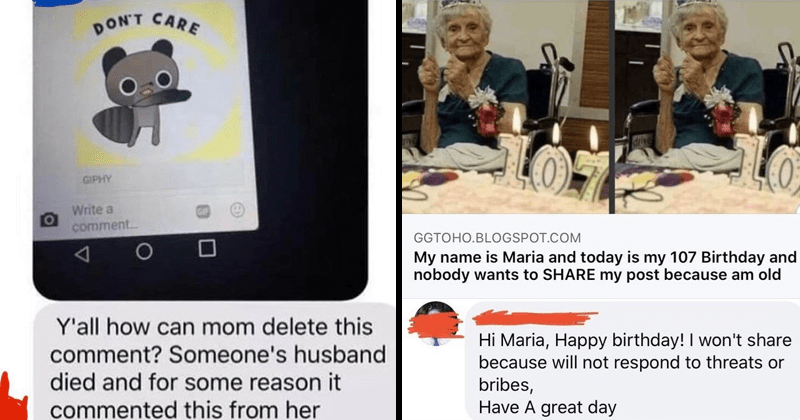 There's a famous proverb that claims 'beggars can't be choosers.' Well apparently there are plenty of delusional jerks out there who don't see it that way. You know the type—the 'startup' company looking for free labor from PhD graduates. The entitled Karen who curses you for declining to deliver a free couch across state lines. The neighbor who thinks paying someone to mow their lawn is basically 'free money.' These audacious displays of greed and entitlement are bad enough on a normal day, but demanding free labor in this economy is especially infuriating.

We've collected some truly maddening posts and messages that were immortalized on r/ChoosingBeggars. Sometimes it feels good to groan in solidarity. 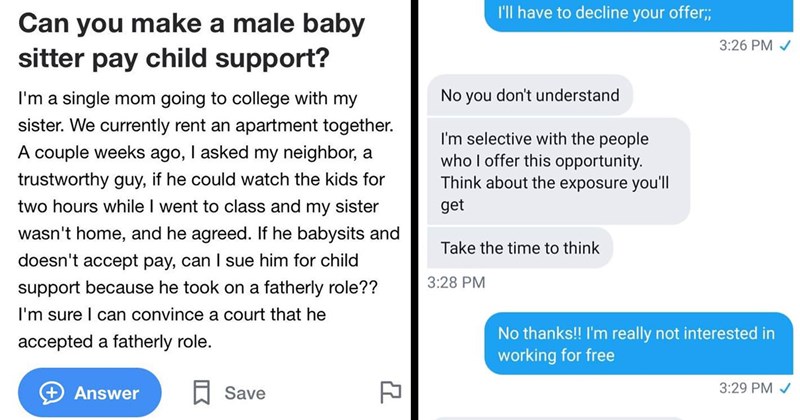 If you've put on a pound or two (or ten) over the pandemic, you're not alone. Will Smith has been gettin' jiggly with it just like the rest of us and we couldn't relate more to his recent Instagram posts in which he flaunts a glorious pandemic gut. One of the posts has a caption that reads, 'I'm gonna be real wit yall - I'm in the worst shape of my life.' A handful of fellow celebs related to the post in the comments and offered both support and playful teasing. It's pretty refreshing to see a Hollywood actor being unabashedly human on Instagram. Way to be body positive, Will! 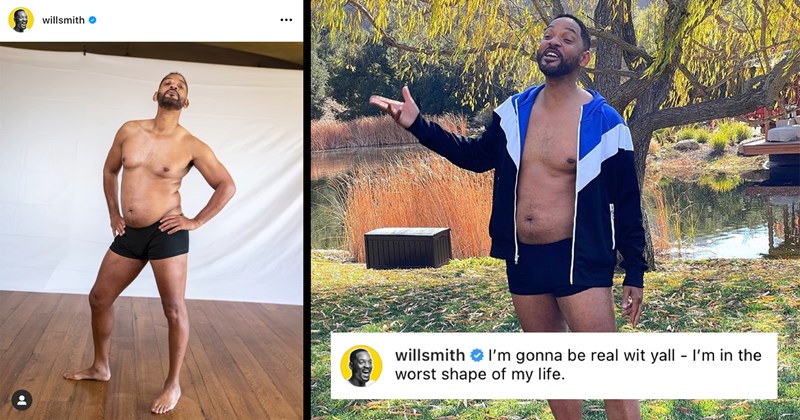 We love dad jokes. We also love bad jokes. Why? Because sometimes they're just so bad that they're good. The eye-rolling they induce, the moans and groans. "So bad it's good" humor isn't just relegated to dads and other punsmiths. There's an entire subreddit, called r/comedyheaven, that solely exists as an archive of content that's "so bad, it's ascended." The community shares everything from text screenshots to movie reviews and news headlines. And they're all deliciously weird, cringey, and oddly hilarious. 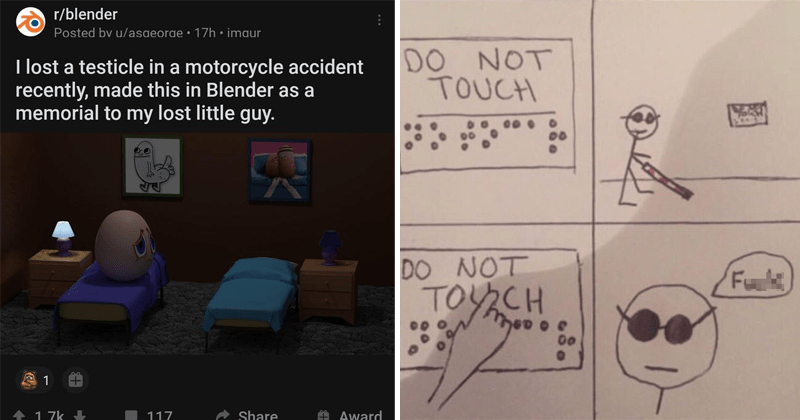 17 Memes That Make Fun Of The Cringey World Of TikTok

TikTok is certainly the latest social media craze among the teens, but it's also come under fire for allegedly collecting user data and sending it to Chinese authorities. That, and memers across the board seem to hate it. Accordingly, we've curated this gallery of memes that poke a little fun, and we hope you enjoy! 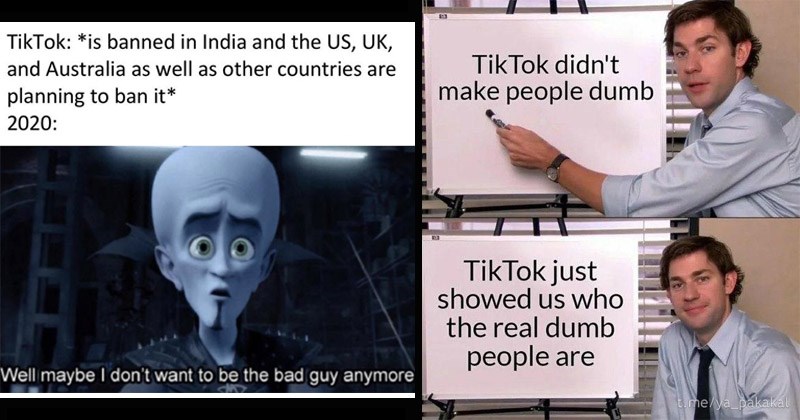 While we are faced with stupid people every day on the internet, some people just manage to stupid themselves apart from all the rest. These social media posts and photos make that very, very clear. To the point where we're feelin' like we belong in Mensa. If you can get past the cringe, maybe they'll stroke your ego, too. 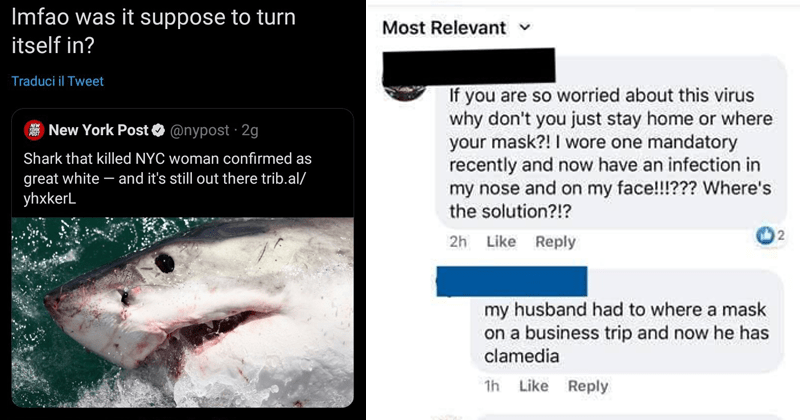 There's something about the anonymity of the internet that allows people to feel completely comfortable lying to other people. Sometimes they lie as a scare tactic, for example, providing bullshit anecdotes to scare people away from vaccines. Some people lie to mine Reddit karma. And then there are the weirdos who simply want attention. Unfortunately for these bullshitters, there are tons of internet users who are just waiting to call them out for their deceptive stories. And we love to see it. 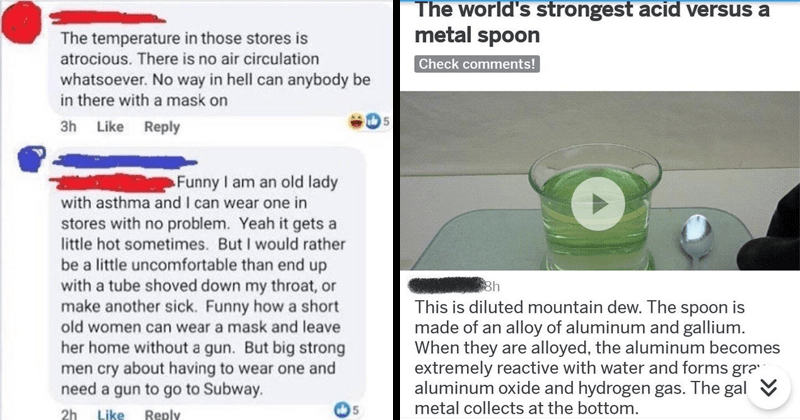 It's hard to define what exactly makes something cringe. It's really a vibe. It's the embarrassing images and comments people post on the internet without irony that inspire others to log off. It's something that makes you feel ashamed just for having witnessed its awkwardness. So why do we subject ourselves to this pain? Well, because it's funny. If you're in a masochistic mood, we've got a whole bunch of cringe content for you to wince through. To be fair, a few of these specimens from r/cringepics and r/cringetopia are cringe in a self-aware way, which is actually kinda based. 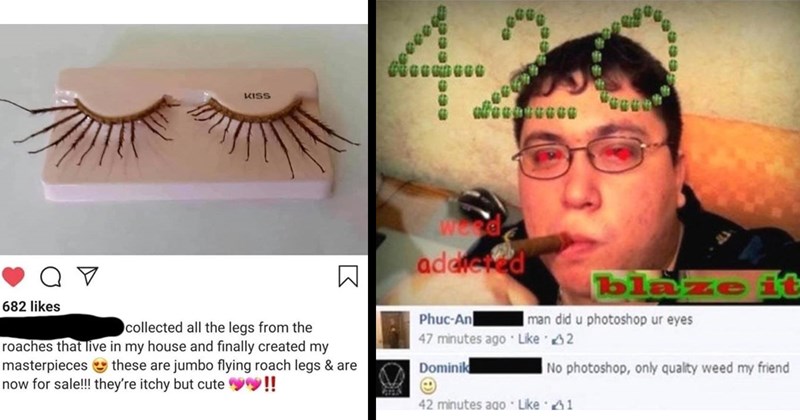 Self-owns aren't just for insecure types. Sometimes kamikaze by words is the only way one can win a battle of insults. For internet rubberneckers who love to catch a good Twitter fight or Reddit thread squabble, we've got a handful of spicy times people roasted themselves just to take someone else down with them. We've gotta hand it to these madlads—it takes a bit of skill to annihilate someone through a self-own. 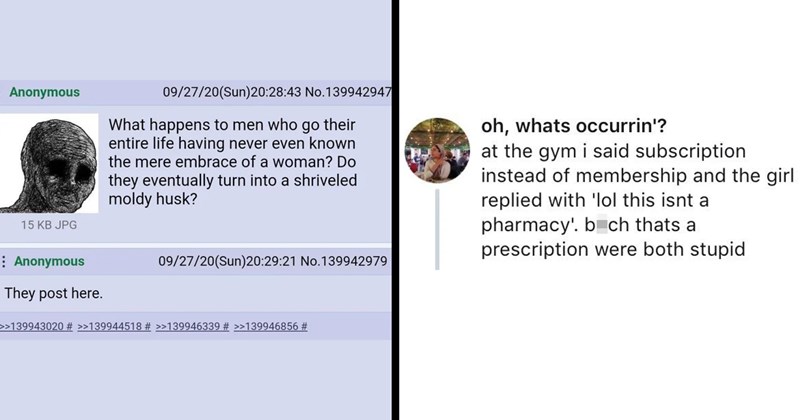 We've all seen it happen—someone perfectly sweet and lovely turns into an absolute monster when they're suddenly in a situation that brings out the worst in them, like being hangry, or air travel, or being stuck in traffic when they're already late to work. Redditor u/666FuCkThEwOrLd666 prompted r/AskReddit to discuss these common triggers that turn humans into maniacs, and the responses are pretty spot on. 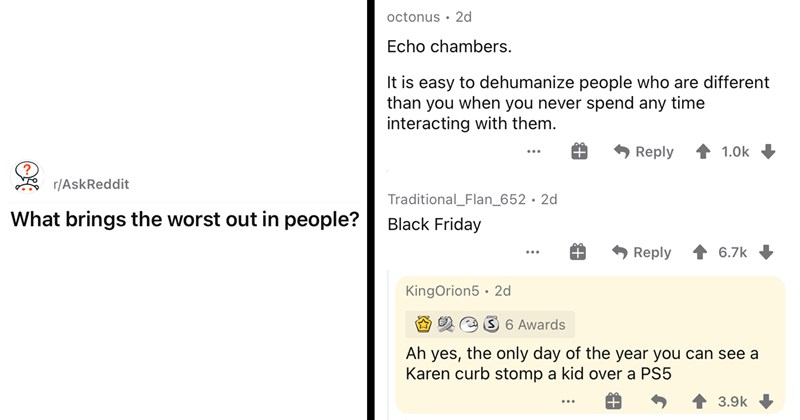 'When neighbors start talking, good things happen.' What might have seemed like a sensible slogan at the time, now feels more like the punchline to the fantastic accidental comedy of Nextdoor. We're eternally grateful for Twitter account @bestofnextdoor, who does a killer job documenting all the hilarious little moments that happen on the app and would otherwise stay in that context. Sometimes it's fun to elevate the minutiae and pettiness of everyday life. We' sure got a few chuckles out of this batch of Nextdoor gems. 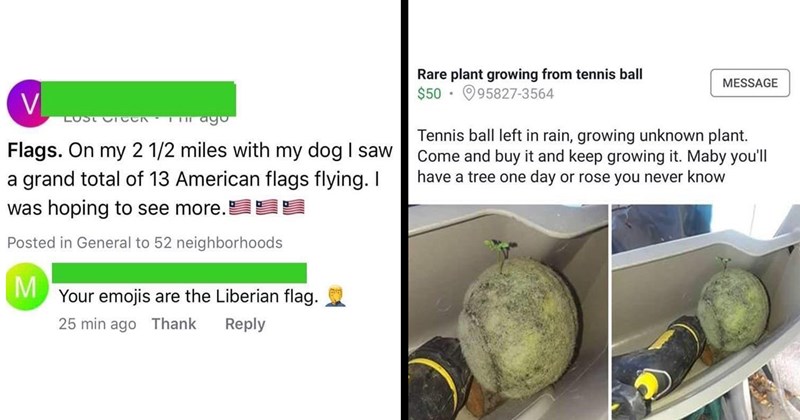 Columnist Gets Demolished By Twitter For Op-ed About Millennials

The oldest millennials are about to be 40 and the media is still somehow telling the entire generation to 'grow the eff up'—a tall order in the midst of constant ecological, financial and health crises. Not to mention war, unemployment, non-existent job security, housing market collapse, student debt, and on and on and on. Yesterday, journalist Jennifer Rosner got dragged by Twitter after the Chicago Tribune plugged her op-ed piece about millennials. When you read the article itself however, it becomes clear that the Chicago Tribune's tweet was a bit misleading. The post that riled up thousands of millennials read, 'writer Jennifer Rosner predicts COVID-19 lockdowns will force easy-breezy millennials to grow up.' In the actual op-ed, Rosner covers her ass by framing the various criticisms of millennials as her boomer dad's opinions. She simply suggests that the pandemic may have something to do with her fellow millennials suddenly embracing a more suburban sort of life that her father's generation might approve of. In any case, the Tribune's tweet was more than enough to hit a nerve. We've collected some of the spiciest roasts from before the controversial tweet got deleted. 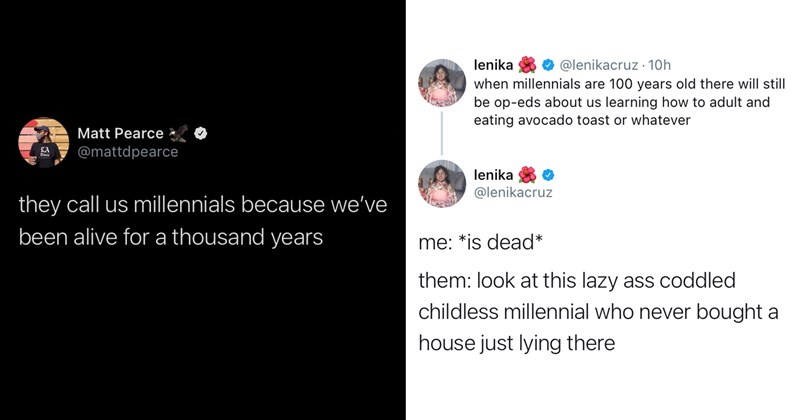 People with dirty names really, uh, came together after Natalie Weiner tweeted a photo of a form that claimed her surname was actually offensive language. The Cummings, Gays, and even a Schmuck came to the thread as a show of sweet and hilarious solidarity. Beyond appreciating the general entertainment of this thread, we really hope that the exchange has shined a proper light on the plight of people with naughty names. They deserve justice. 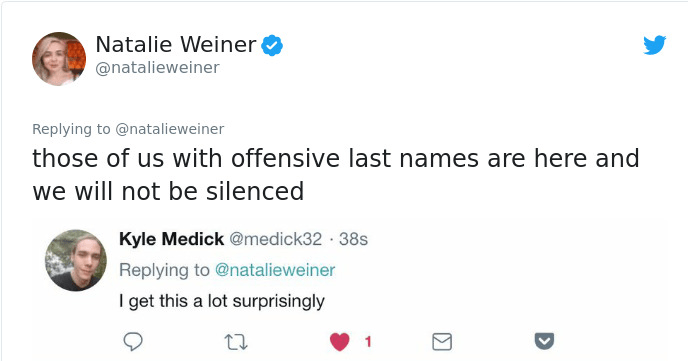 Everyone loves genuinely nice guys who respect boundaries and show compassion towards others. But Nice Guys™ are a whole other breed of dude. Cringey Nice Guys will become friends with a woman with the assumption that the friendship will lead to sex. Nice Guys think that performing basic social expectations means they are entitled to sex. Nice Guys are anything but nice. We've got a handful of cringey Nice Guy moments that were immortalized in screenshots forever. 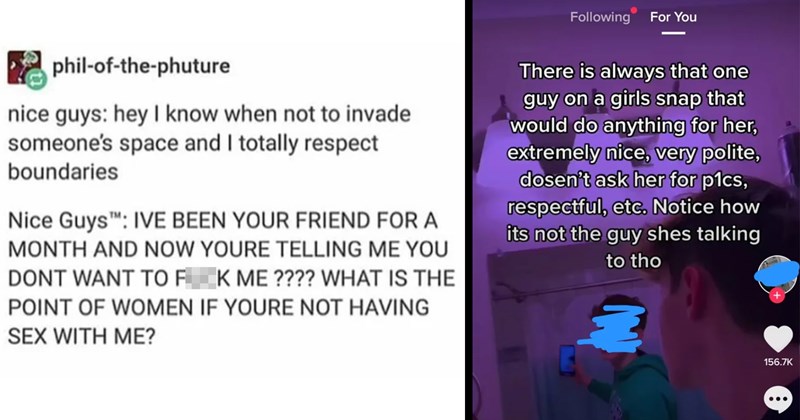 Ever just see something on the internet and recoil in revulsion? Welcome to almost every damn day of our lives. Between cringey social media posts, cursed images, and gross imagery, there's plenty of content blowing around to leave you feeling uncomfortable. While some people will undoubtedly say "Thanks, no thanks" to this gallery of scrollable pain, other people - probably those of you who are as numb as us - will probably eat up the opportunity to feel anything. Even disgust. Apologies in advance. 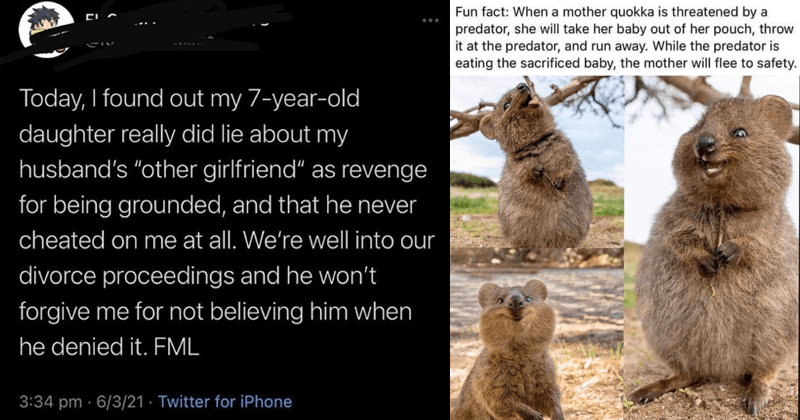