20 Gold Posts From The Nextdoor App

One of our favorite Twitter accounts @bestofnextdoor is still at it with the hilarious gems from Nextdoor. If you aren't familiar with the app, it's basically facebook for specific neighborhoods. The creators had the theory that 'when neighbors start talking, good things happen.' Not everything that happens on the app is good, per se, but things can definitely get pretty weird, that's for sure. If you've ever been pissed off about someone on the block leaving slices of cheese on your windshield, Nextdoor is your place to publicly complain. We've got a handful of gold posts from @bestofnextdoor that range from hilariously petty to actually kind of wholesome. 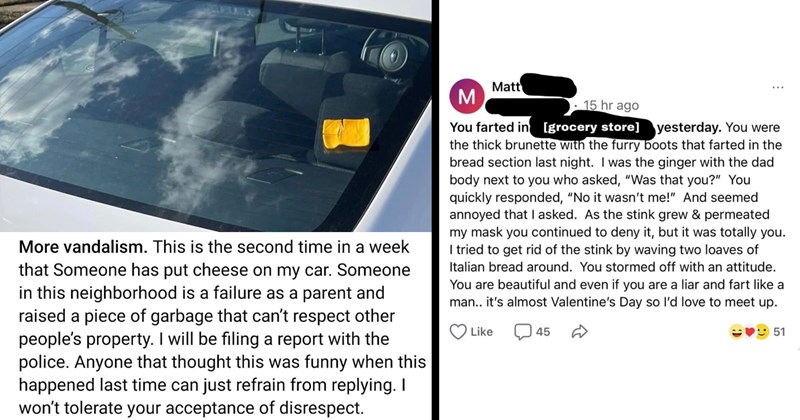 If you noticed Armie Hammer was trending on Twitter yesterday, you probably weren't prepared for the reason why. The alleged leaks of his correspondence with several women are not only NSFW, but are extremely graphic in his apparent lust for blood. The actor, who recently announced his divorce from Elizabeth Chambers, went as far as to proclaim "I am 100% a cannibal."

While @houseofeffie has since claimed the messages were fake, the other victims have not admitted to any such foul play. After that admission, to make things more confusing, writer Jessica Ciencin Henriquez (who has been linked to Hammer in the past) tweeted "If you are still questioning whether or not those Armie Hammer DMs are real (and they are) maybe you should start questioning why we live in a culture willing to give abusers the benefit of the doubt instead of victims. TW// sexual violence."

For obvious reasons, we're not going to include the grisly DMs in this gallery. But you can easily find them through the links above. Instead, we're going to focus on all the Twitter reactions that cover our feelings on the matter, from disbelief, to stunned humor, all the way to disgust. 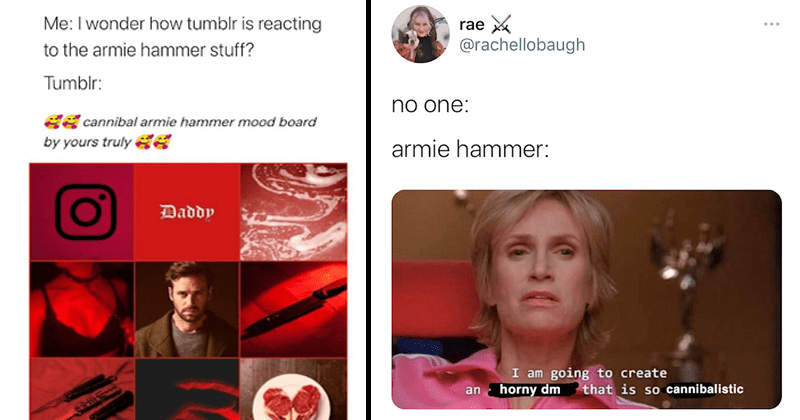 Looks like 2021 has claimed its first victims. You know, besides the thousands of people who have died of Covid-19. Page Six dropped a bomb on pop culture fanatics yesterday. The bomb? That Kim Kardashian and Kanye West are getting divorced. The exclusive report claims that multiple sources have come forward to share that "divorce is imminent" for the couple. This isn't the first time a tabloid has teased their journey to Splitsville, but Page Six cites Kanye's absence from the Kardashian family holiday celebrations and Kim's equally absent wedding ring as proof that they are calling it quits.

The high profile couple has yet to speak on the matter, but people on Twitter are making up for their silence with some seriously funny and scathing reactions. While some people are giddy about the news (people who love drama, Kanye fans who crave new music), other Twitter users are using this moment to call out Kim and Kanye for their narcissism, money-hungry families, and some of the more ridiculous stunts of their relationship. And then there are the people who claim they don't care - but for some reason feel the need to tell the world about it. 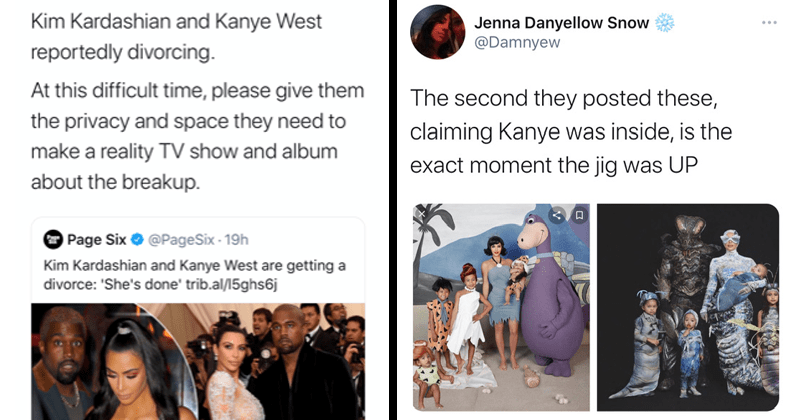 Nextdoor is sort of social network where people within a specific neighborhood can exchange recommendations, greet newcomers, chat about local news, and post about anything that's relevant to the community. The creators of the app might have envisioned helping to enrich communities in positive ways, but in reality, Nextdoor is often used as a social tool for neighborhood gossip and shit-talking. According to @bestofnextdoor, the app is basically 'Twitter for old people,' which is pretty apt if you take a scroll through @bestofnextdoor's hilarious screenshots. We've collected some of the funniest recent gems from Nextdoor users' findings. 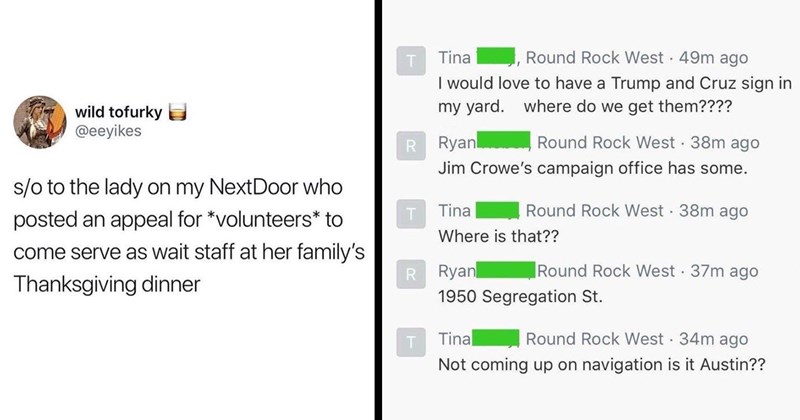 Why Is This So Accurate 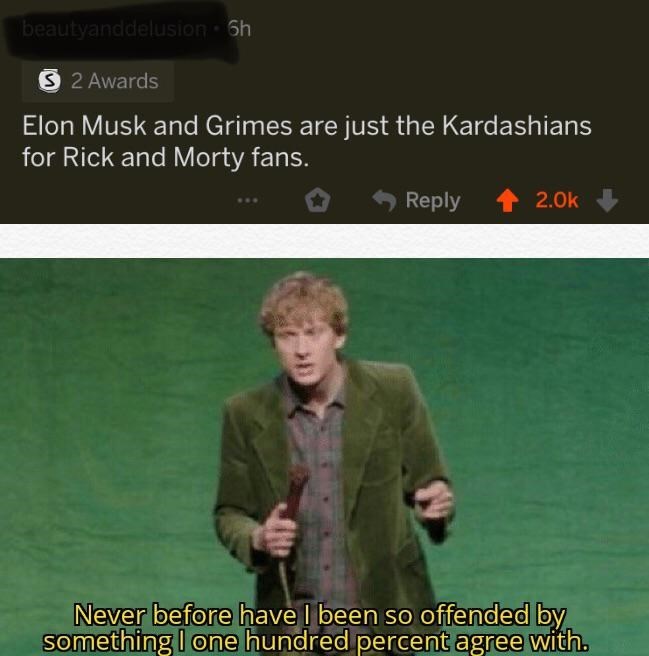 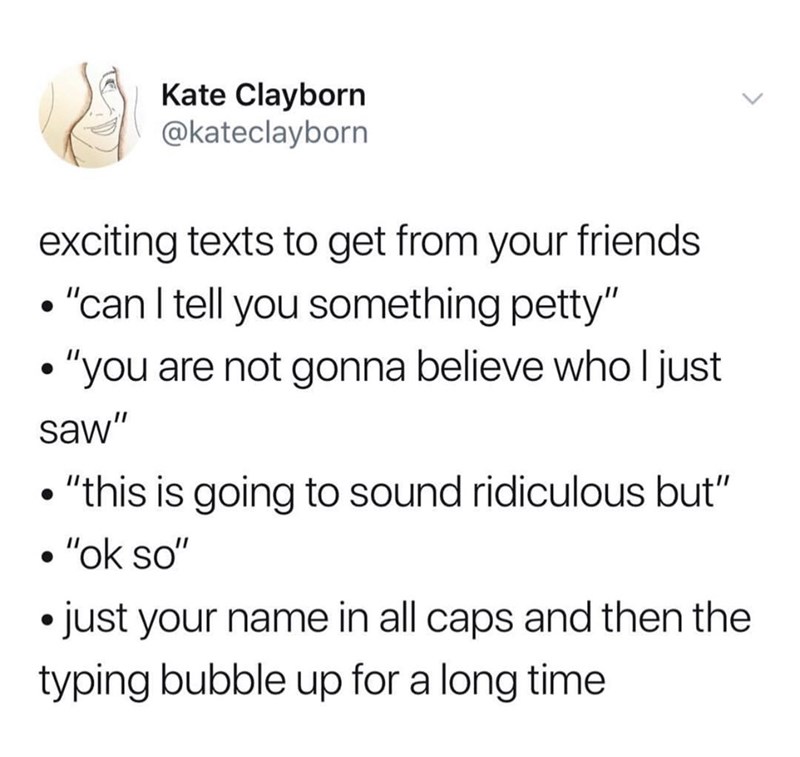 Your source of excitement starting in your late 20s! 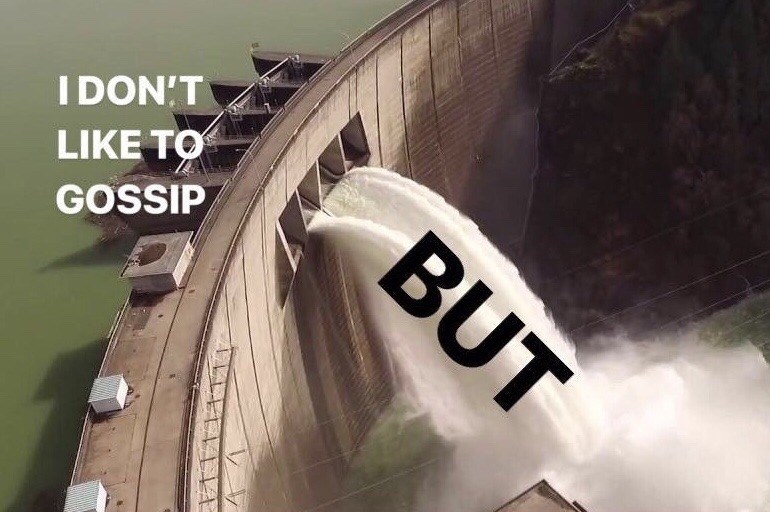 Let's not lie to ourselves...we all love the gossip.

It's A Win-Win Situation! 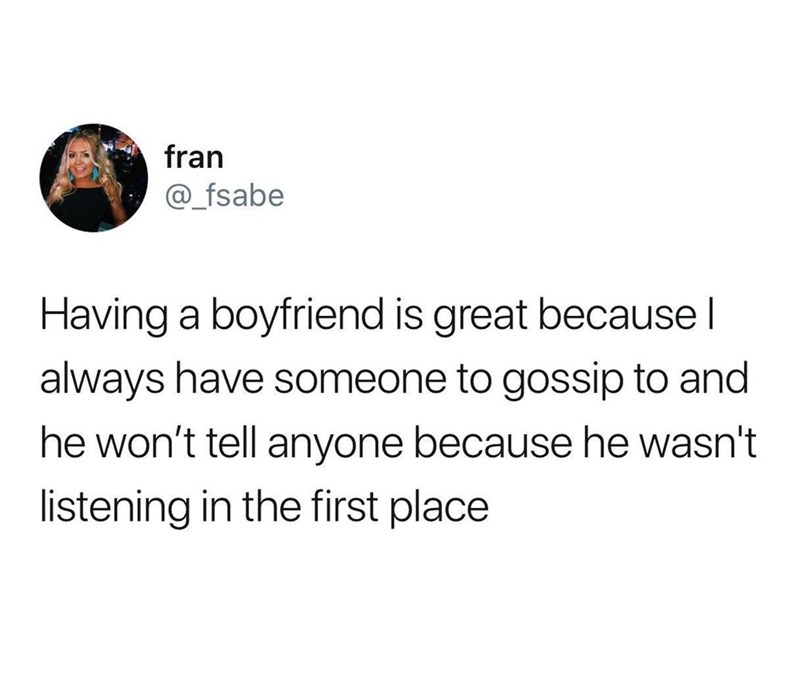 Secrets are always safe with boyfriends!

14 Gossipy Memes For Anyone Who Loves To Spill The Tea

We know we're not supposed to love gossip, but some of us just can't help it. 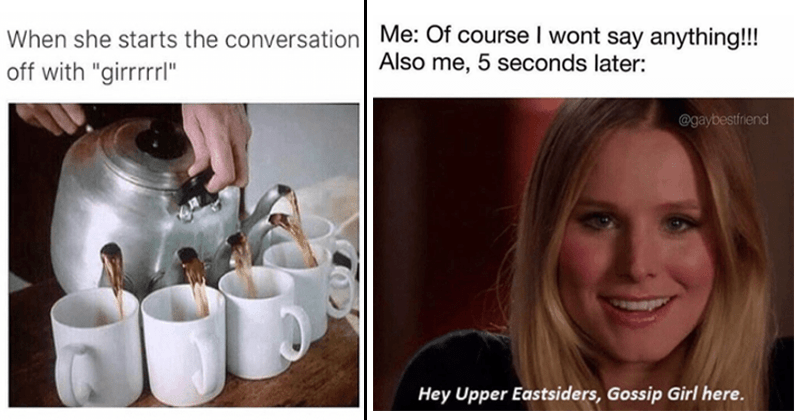 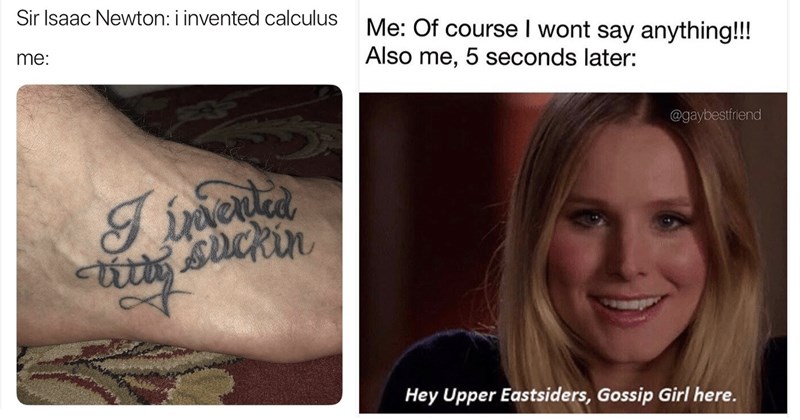 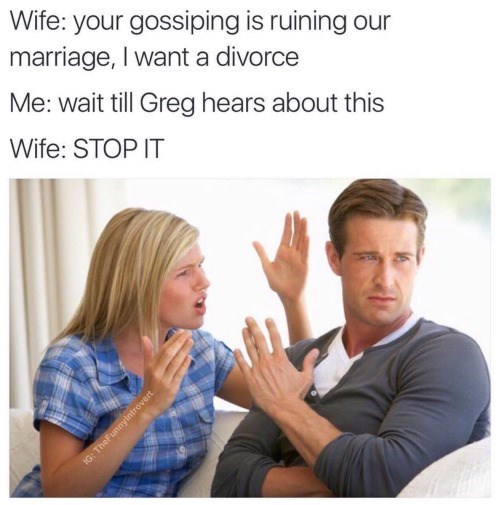 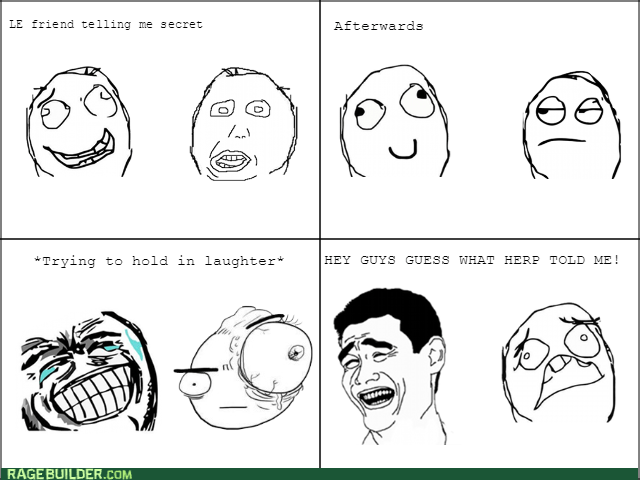 A Lesson We Should All Learn 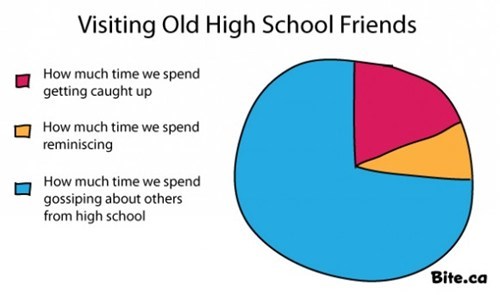 What girls do at sleepovers according to men 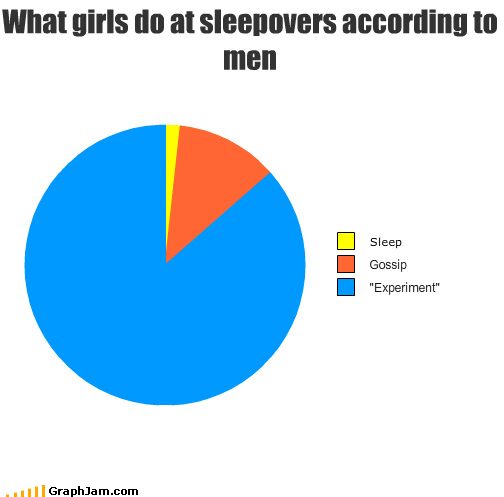 A Moment to Talk About Jesus 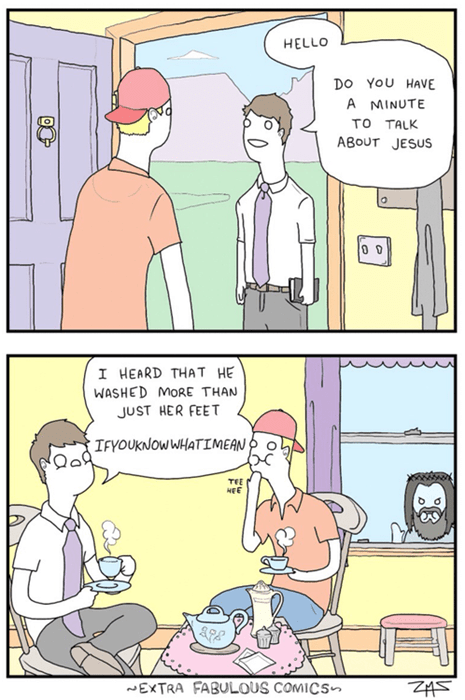