Avengers Lookalikes Are Eating Together on TikTok and It's Pretty Wholesome

Ever wish you could see what kind of casual and mundane things the Avengers get into when they're not saving the world? Well now you can. Sort of. Marvel doppelgängers have started a wholesome new trend on TikTok that initially splintered off from one Scarlett Johansson lookalike's videos in which she enjoys some tasty food to the tune of 'Leave the Door Open' by Bruno Mars and Anderson Paak. What started as a simple duet between Black Widow and Hawkeye evolved into a multiverse of bizarro Avengers virtually eating lunch together. Maybe in a few days we'll get to see the entire cast in a single TikTok! 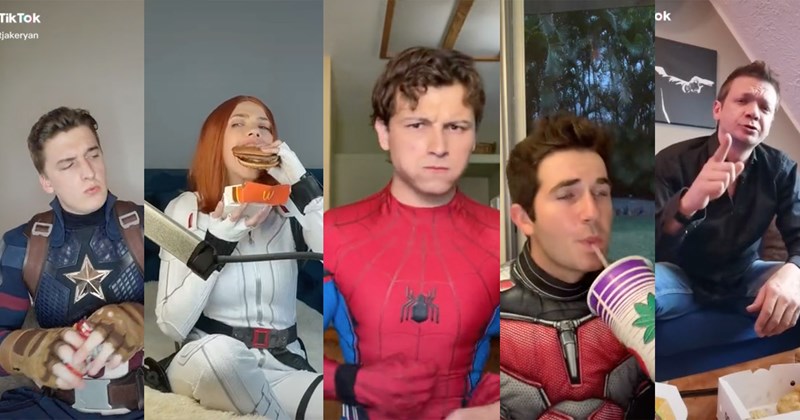 A Family-Sized Serving of the Best Vin Diesel Memes

It's already been two weeks since F9 sped its way into theatres, but it took until this past weekend for memes about the series to really explode. And you guessed it, they're about family. It's no secret that the familial bond is Dominic Toretto's main priority. The character, who is played by Vin Diesel, talks about his loved ones all the damn time. This devotion exposes the sweet side of the seemingly  fearless criminal. It also exposes the character to the ruthless wiles of meme makers.

While Toretto's love of family has always been a bit of a joke, it wasn't really illustrated in memes until late June, when Geek Culture shared a prequel meme featuring Dom and Anakin Skywalker, talking about -  you guessed it - family. The meme quickly became popular on Facebook, and then Twitter, where it's been nearly unavoidable. And as Dominic Toretto stans, we're not complaining. We've put together our favorite iterations of the jokes, despite the backlash that is beginning to brew. As forced memes go, this one is timeless. At least until they stop making Fast and Furious movies. 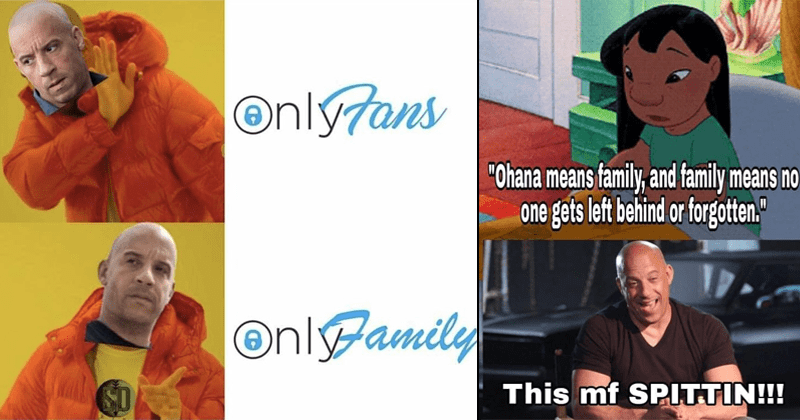 Happy weekend! As the weather here gets warmer, a lot of people seem to be abandoning their couches for grassy, tree-filled parks or sunny beaches. The light of summer beckons the active, luring them into happy bike rides and Instagrammable picnics. After over a year of staying indoors, we definitely can't blame people for wanting to get out there. But there's another part of the population who needs the weekends to really recharge. This part of the population recognizes that being horizontal is a luxury that is hard to pass up when you're grinding the whole week long. This group of people needs easy entertainment that doesn't require standing up or lacing up some sneakers. And we're here to provide that in the form of memes, tweets, and weirdo posts that will soothe souls without making you break a sweat. 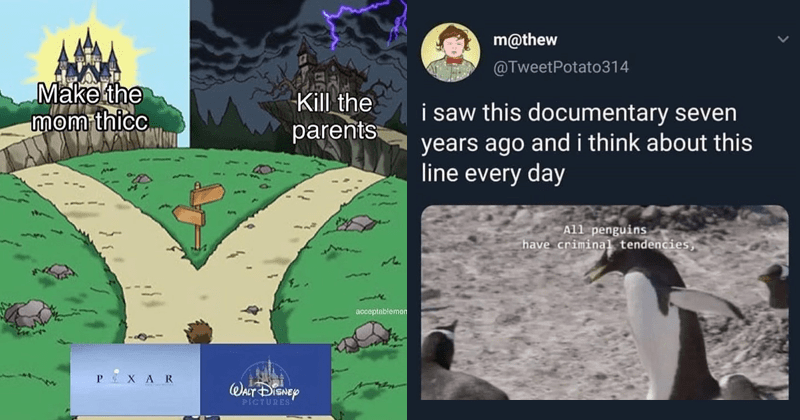 We're all familiar with the story of Mulanfrom the classic '90s Disneymovie, but what you probably didn't know is the lesser-known tale of Captain Li Shang questioning his sexuality. Being the '90s and all, people weren't as comfortable talking about different sexual orientations as we are now, but the story is finally coming out of the closet! (sorry.)

All jokes aside, please enjoy this hilarious retold version of Mulan! 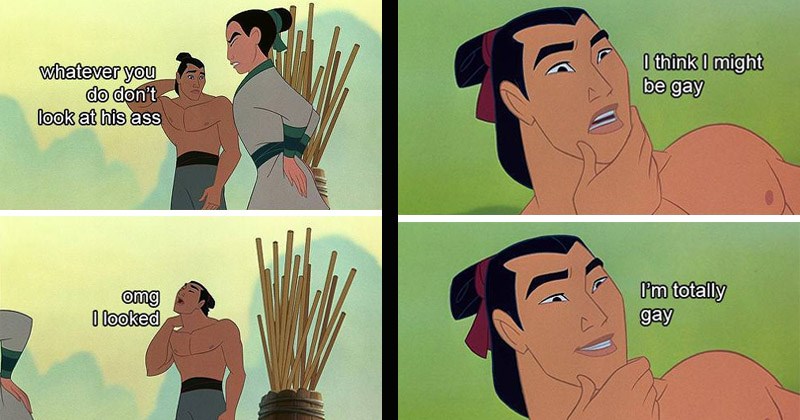 Disney freaks and Tumblr nerds, rejoice! These amusing tidbits combine our favorite animated movies with some of the funniest and weirdest people on the internet. 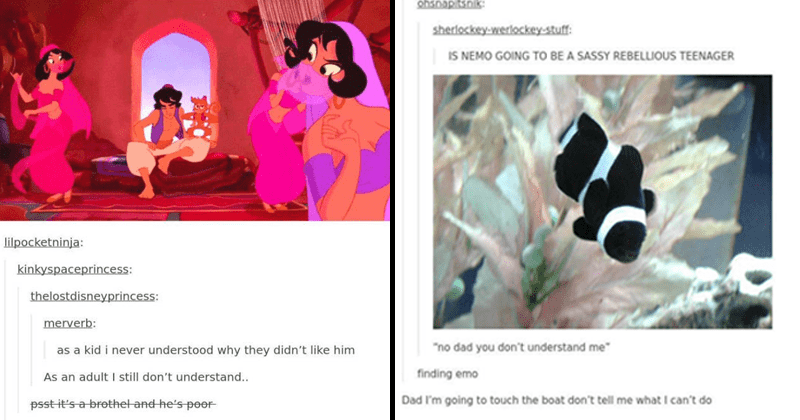 I'd Never Abandon You 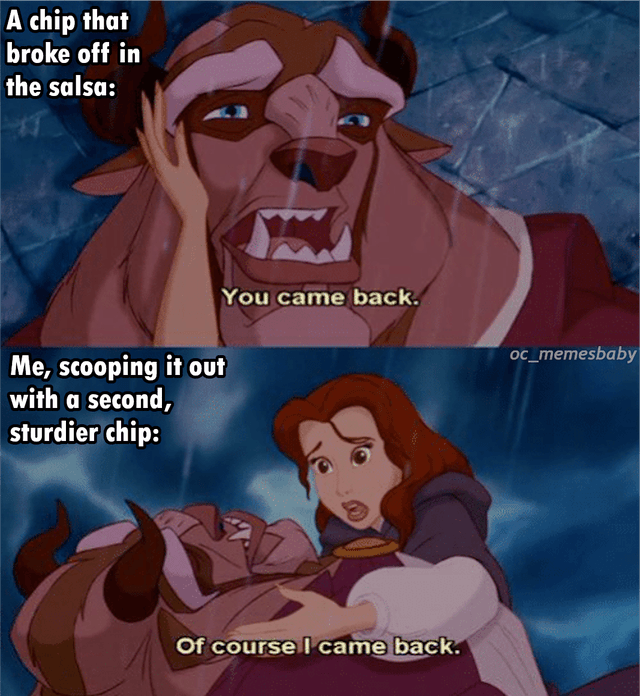 Today Disney announced the all-star cast of their coming Star Wars spinoff, Obi-Wan Kenobi, which includes the return of Ewan McGregor and Hayden Christensen. Although the Star Wars prequel trilogy has garnered some brutally negative reviews over the years, McGregor as young Kenobi is beloved by many different kinds of Star Wars fans, and so it's no surprise that the cast announcement has been received well on social media. Whether you're stoked about the new series or would rather not be reminded that the prequels exist, there's one thing we can all get behind, and that's memes. We've put together some of our favorite Kenobi memes for all the Star Wars fans out there and we honestly can't wait for all the new memes the show is bound to inspire. 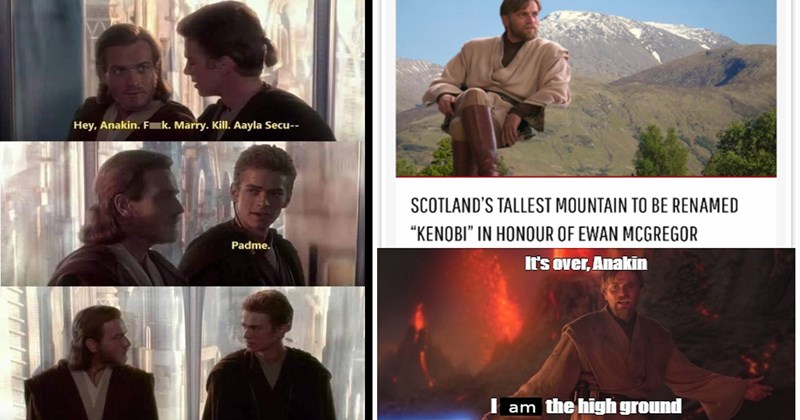 Warning: If you haven't seen Avengers: Infinity War or Avengers: Endgame, some of these memes contain spoilers.

The Avengers are still going strong in the Marvel Cinematic Universe. You'd think they'd retire after witnessing the instant extinction of half the human population, but our favorite heroes are still at it in Disney's latest series. If you're as stoked as we are about Marvel lore, you'll surely get a kick out of these Avengers memes full of funny references. 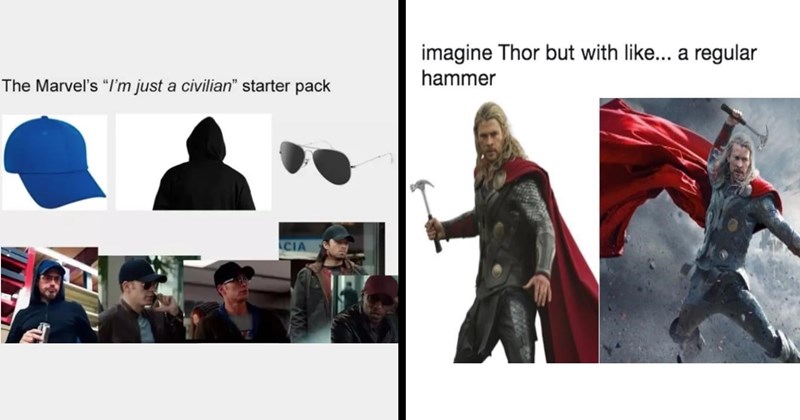 'The Falcon & The Winter Soldier' Twitter Memes For Avengers Stans

Spoiler Alert: If you haven't seen Avengers: Endgame or the first episode of The Falcon And The Winter Soldier yet, you might want to hold off on scrolling through these memes for now.

The premiere of The Falcon And The Winter Soldier had its debut last week and became the most-watched episode on Disney+, which is pretty impressive considering how popular their last hit series WandaVision was. Despite the fact that Endgame felt like a pretty definitive conclusion to the main Avengers storyline, momentum and excitement for the franchise hasn't waned in the slightest. We've collected some Twitter memes and reactions to the new series—seems like people are pretty stoked to see what happens next. 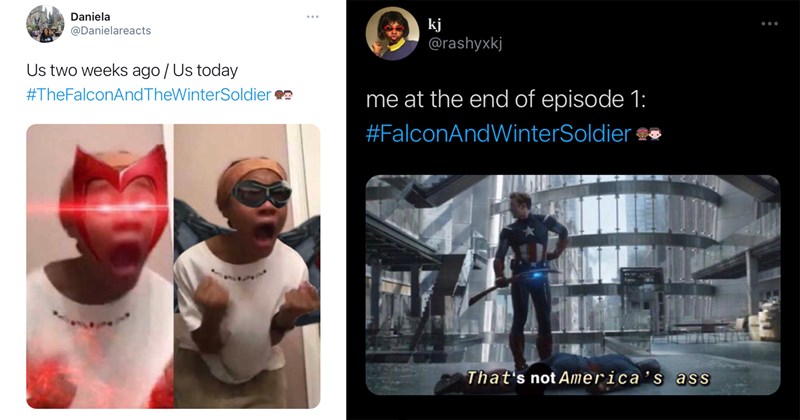 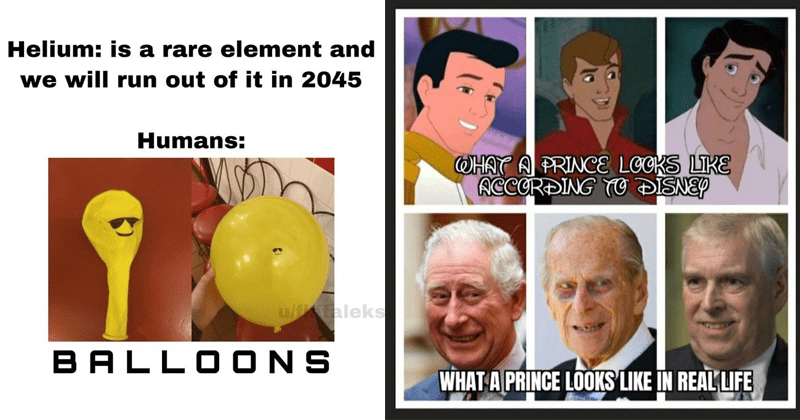 Okay, before you get mad at us for indirectly insulting the Star Wars Prequel Trilogy, just hear us out. Without those 418 hours of boring dialogue and confusing plot holes, we wouldn't have the sea of dank prequel memes we have today, so in a way we're giving George Lucas a compliment. You're welcome. Whether you're a fan of the prequels or not, we're sure you'll enjoy these funny memes full of Star Wars lore. 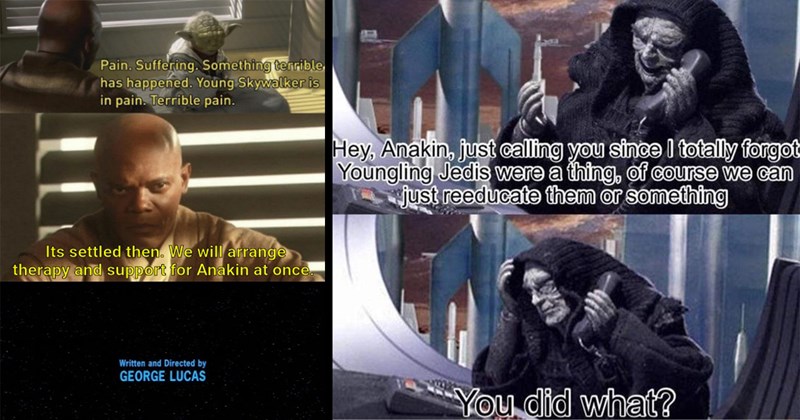 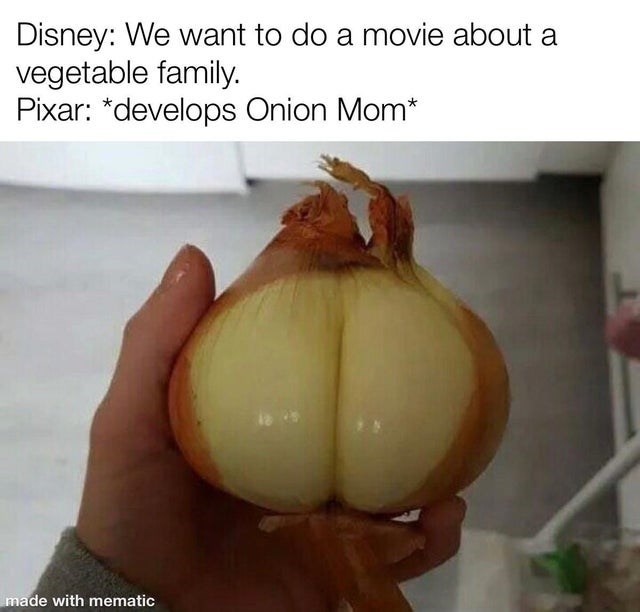 Everyone's favorite sinister fashionista is back in the live-action form of Emma Stone as Cruella De Vil. This isn't the first time Disney has turned one of its classic evil villains into a feature-length origin story. In 2014, Disney portrayed Maleficent's wicked fairy queen of the moors as a tragic figure rather than the 'Mistress of All Evil' we remember her as in Sleeping Beauty (1959). For many, the humanizing depiction of Maleficent was refreshing—especially after decades of tired character tropes from Disney giving us the same old formula: the evil witch, the meek young princess, and her dashing man-savior. But in light of the new Cruella trailer, it seems like the same enthusiasm isn't being extended to this particular villain. I mean, the character literally kills puppies—do we even want to know that origin story?

One common pre-emptive criticism of Cruella is that the trailer hints at a 'jokerfied' character arc. It's hard to imagine young Cruella as an Arthur Fleck—a distinctly anti-social man who grew up in poverty—but hey! Anything can happen in fiction, baby. Others have compared Emma Stone's Cruella to Harley Quinn, which makes some sense when weighing their basic aesthetic similarities, but otherwise they don't have a whole lot in common as characters. Harley Quinn broke into Gotham Zoo to free the hyenas, whereas Cruella De Vil probably wouldn't set foot in a zoo unless it was to shop for a new coat. Does Cruella fit the Joker archetype of outcast scorned by 'society,' or is she just a dog-hating psycho? I guess we'll find out when the movie is released this May. For now, we've collected some pretty amusing reactions to the new trailer. 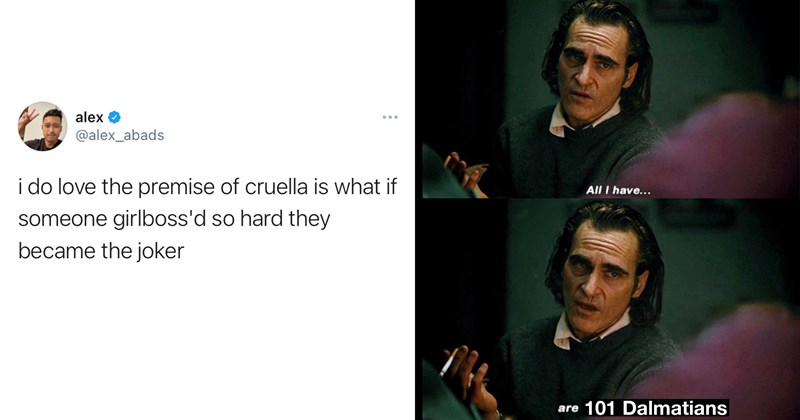 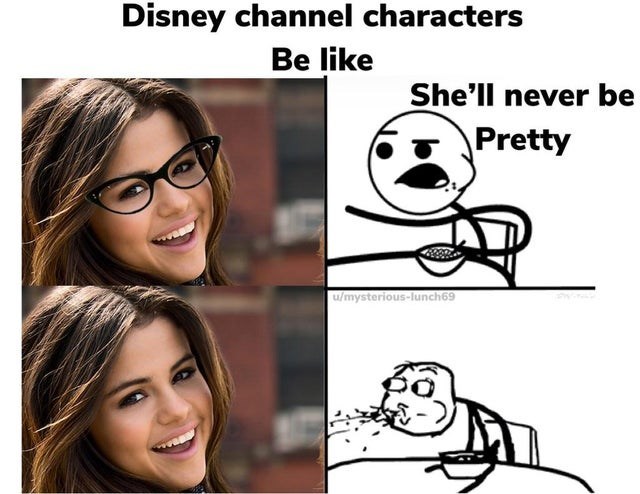 The original Star Wars Trilogy will always have a special place in the hearts of millions of fans of the franchise. Say what you will about the sequels, prequels, and offshoots, but no one can deny that the new generation of Star Wars lore has inspired a massive amount of memes. Especially shows like The Mandalorian and The Clone Wars. If you can't get enough of all the nerdy memes featuring Grogu and young Obi Wan, you'll enjoy this fandom-filled collection. 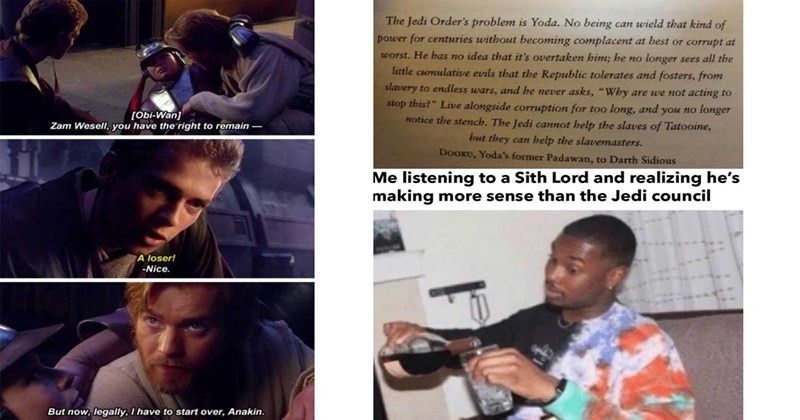 Don't spend it all in one place 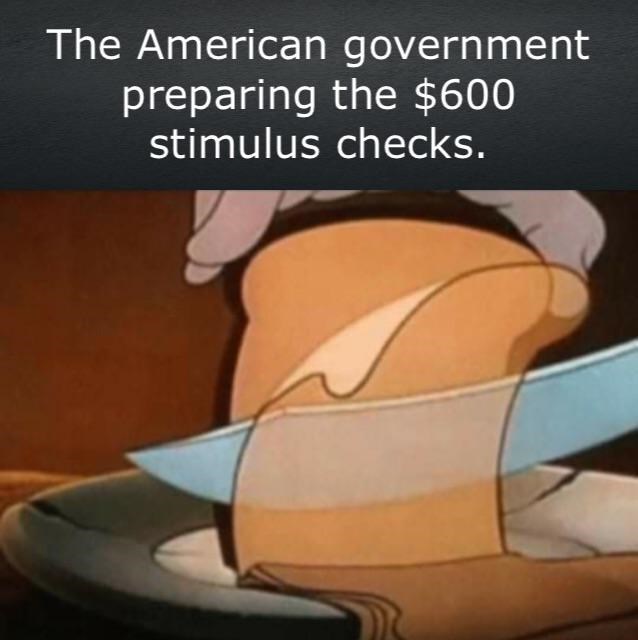