Once again, Batman is getting makeover and this time we can look forward to Matt Reeves' gritty neo-noir take on the iconic Dark Knight. The Batman isn't coming out until spring of 2022, but some recently leaked Warner Bros. promotional materials have fans hyped, particularly for The Riddler's new look. We've all seen the trailer, but these new images shed a bit of light on Riddler, whose face was literally shrouded in darkness up until now.

At first glance, Riddler gives off gimp Unabomber vibes, but given a closer look, a mysterious symbol beside the masked man looks awfully like the Zodiac Killer's signature. Creepy! Fans are revisiting the trailer with this new knowledge and finding even more hints at a Zodiac Killer-inspired Riddler.

Whether you're stoked to experience Paul Dano as an edgier, scarier Riddler or you prefer Jim Carrey's painfully goofy and spandex'd version, it's fun to see just how much a classic character can be interpreted over time. Of course, there are fans who get worked up over supposed canonical authenticity, but one could argue that the continual cinematic rehashing of Batman is in the spirit of the comics, whose arcs and characters were constantly transforming into something new. Keep scrolling to see what others are saying online. 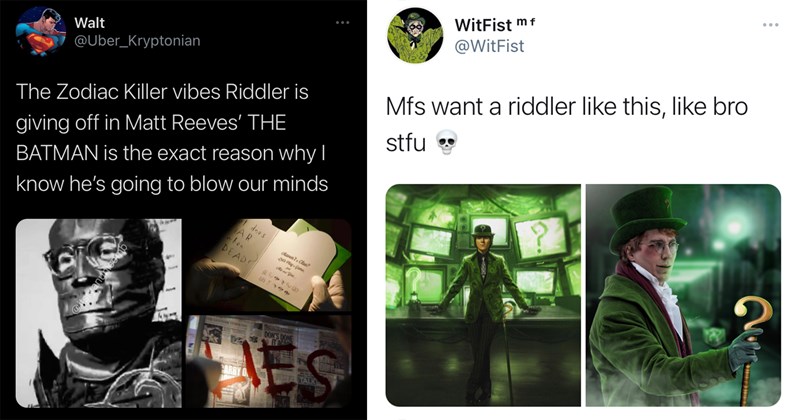 40+ Random Memes That Are Begging to Be Stolen