If you've been on Twitter at all in the past 24 hours, you've probably seen that Prego is trending. No, the pathetic excuse for a pasta sauce has not been abolished from grocery store shelves. Instead, the gullible people of the internet are expressing their shock and horror at yet another white person who thinks that smearing food over a shining kitchen island is a "hack."

Obviously the video above from "Josh and Lisa" is disturbing. It's even more disturbing with sound as its participants pretend this is a serious party trick. The dry noodles. The premade...everything. The counter. It's enough to send Gordon Ramsay into a coma. Also disturbing is the fact that people are completely eating this charade up. Which is more than we can say for that pasta.

If a person with deductive reasoning (hello) does even a little bit of digging, it becomes obvious that this video - and many like it - are the brainchild of attention-hungry influencers who film "pranks" with clickbaity titles. The same goes for that nacho hack that horrified us around the Super Bowl. Following repeated viewings of that scarring video, we realized its creator, Taylor Watson, had included the controversial clip in a folder called "Pranks!"

Josh and Lisa's videos look eerily similar to Taylor's. They even filmed a "nacho hack" of their own. It's got to be the most pathetic plagiarism we've seen in our lives. Many of their earlier "works" include a pretty damning disclaimer:

Thanks so much for watching this video! I do hope you enjoy it. Please note that this page features scripted dramas,PARODY HACKS, parody and satire. The events that take place in this particular short-film video are for entertainment purposes only.

It's safe to say that this Prego-laced abomination belongs in that category. While some people may say it's all in good fun, we had a feeling these milquetoast "creators" knew exactly what they were doing. And according to a piece from Eater - we were right. It turns out that all of these despicable shows of "cooking" from polished Facebook personalities lead back to Rick Lax, a Facebook-famous magician with a penchant for using gross concepts to create viral videos. He and his network know they can capitalize on the trope that white people can't cook. And they will continue to do so as long as the views come pouring in. Do they want clout? Do they want engagement so they can start shilling light projectors like viral Twitter users? Or are they in it for fun, as Lax claims? We're not really sure, but it's really time that we stop feeding into their food-wasting, unfunny bullshit.

Edited 1:29 pm to include the revelation of Rick Lax's involvement. 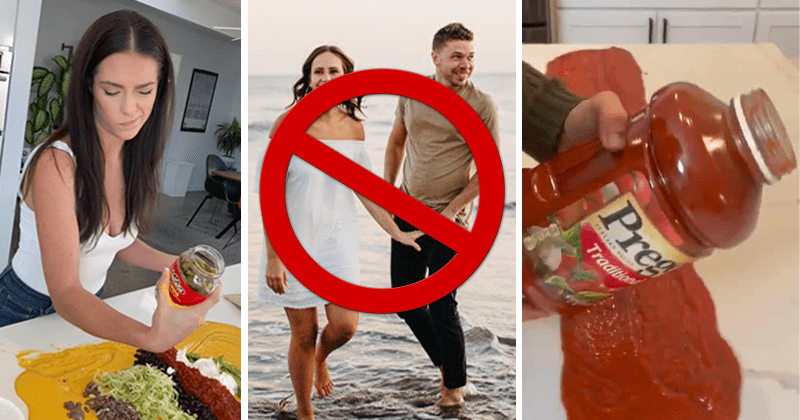