Married life isn't always what it's cracked up to be. While it's great to have the undying love and support of your spouse, there are also instances of grating annoyances and rage-inducing behaviors.  These memes really say it all. 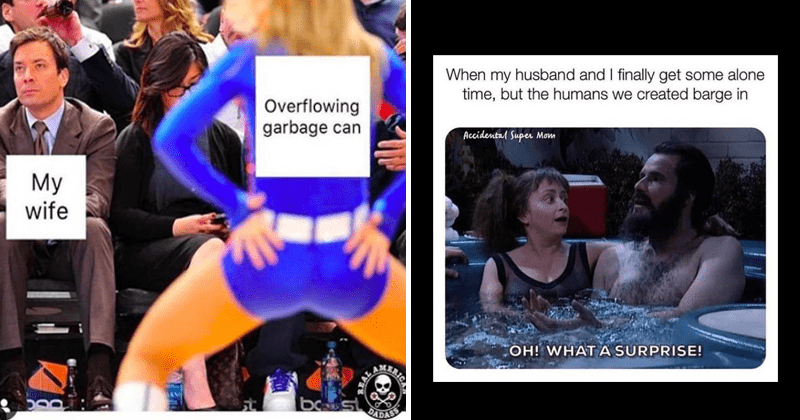 There's been a lot of talk about toxic masculinity over the last few years. And while we are in no way arguing that it's not a real issue, we do believe in positive reinforcement. These heartwarming and totally wholesome moments are a glimpse at the amazing ways some men show up, show vulnerability, and make the world a better place. Bravo. 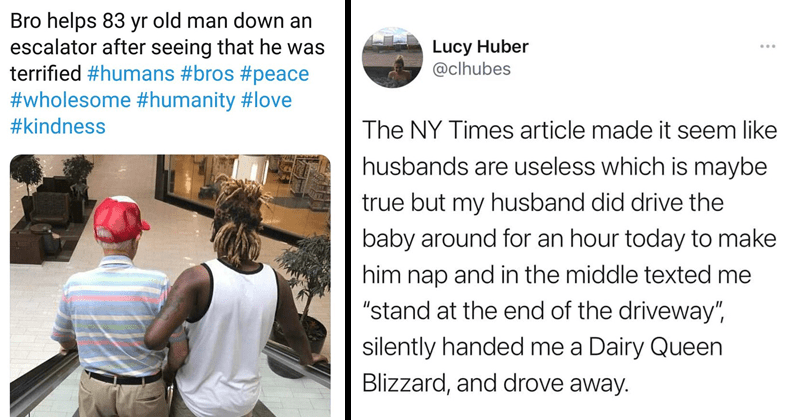 We hear a lot about toxic masculinity these days. But what about the dudes who consistently life people up and set a good example for the rest of the "male" world? We think they deserve some respect. These posts and photos highlight decidedly positive behavior from men - men who are a breath of fresh air in a society that all too often demands stoicism and macho behavior. Enjoy the wholesomeness. 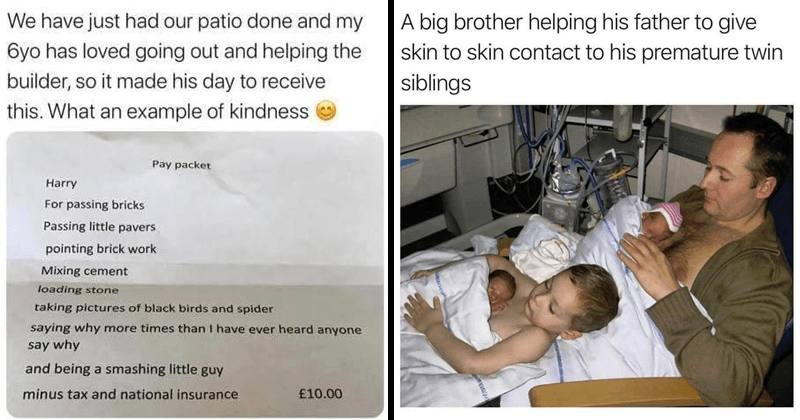 Memes and romance are two things that don't get along. Being genuine? About feelings? That don't involve being depressed? Undeniably cringe.

This incompatibility usually means that when the meme world does deal with love, it prefers to do it cynically. This can be seen in a new Twitter format that gives a sideways glance to anything resembling rose-colored glasses.

The fad started when user @CHERRYH3AVEN put aside concerns about bugs, rain and dirt by posting a photo of a comforter laid in a field, alongside the sentence "Imagine being here with the love of your life".

Imagine being here with the love of your life pic.twitter.com/T2HQJ6baER

Jumping on the ridiculousness of the concept, other users turned the dreamy caption into a copypasta. The meme replaces the original image with some very unromantic places and pop culture scenes.

While the aim may have been to make fun of impractical, Instagram-friendly aesthetics, it makes a good point that love is what you make it. Although if your idea of a dream date is a dirty mattress in the backwoods, that is incredibly weird. 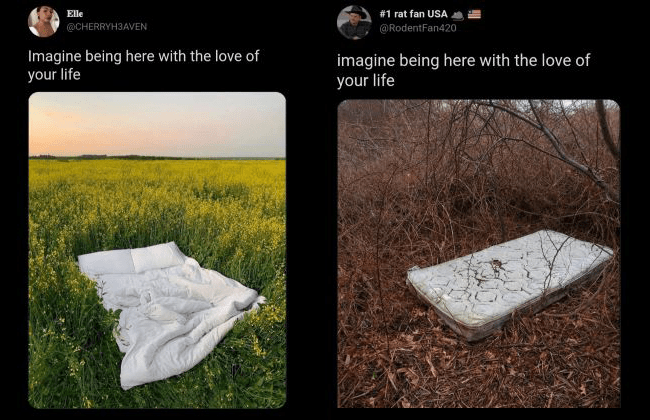 The world, especially this year, is an absolute garbage fire of failure and pain. Between the election and the pandemic, we're barely surviving this hell. To make it all a bit more palatable, or at least to distract you, we've put together this healthy gallery of pleasant memes and tweets. We may not be able to pull a coronavirus vaccine out of our sleeves, but at least we can smile a bit while we wait. 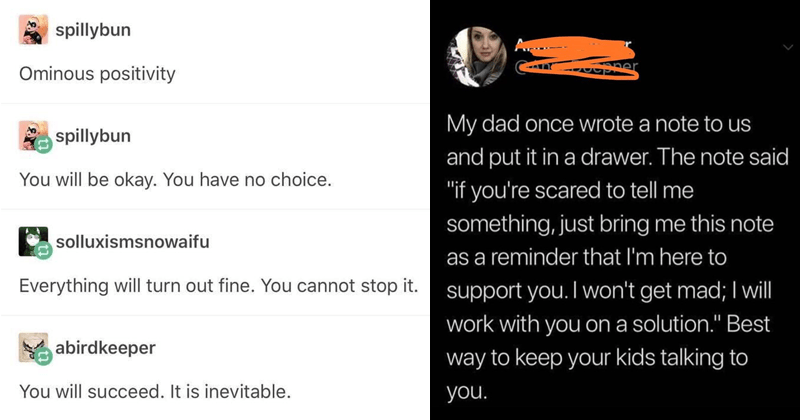 It's important to be able to share things with your partner, whether you've just started dating or have been coupled for what feels like an eternity. This means sharing hopes, dreams, fears, and most importantly, sexy relationship memes. These particular specimens range from sappy relationship memes to savagely relatable relationship memes and they're sure to make your significant other or crush smile, laugh, or feel personally attacked. All good options. Oh, and one more list. 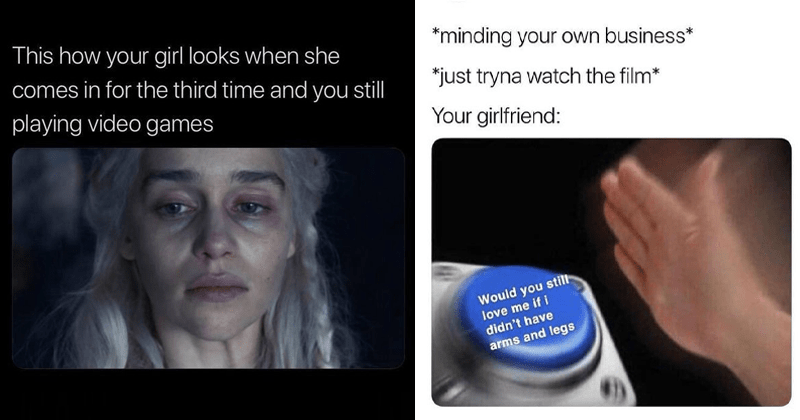 Hallelujah, we've made it to another weekend. With the week's chaos and torturous responsibilities behind us (temporarily) it's important to make the most of our free time. Before we get into the brunching, the friends, and the relaxation, we like to turn to the internet for a little palate cleanser, and there's no greater refresh than happy, wholesome, and life-affirming pictures. 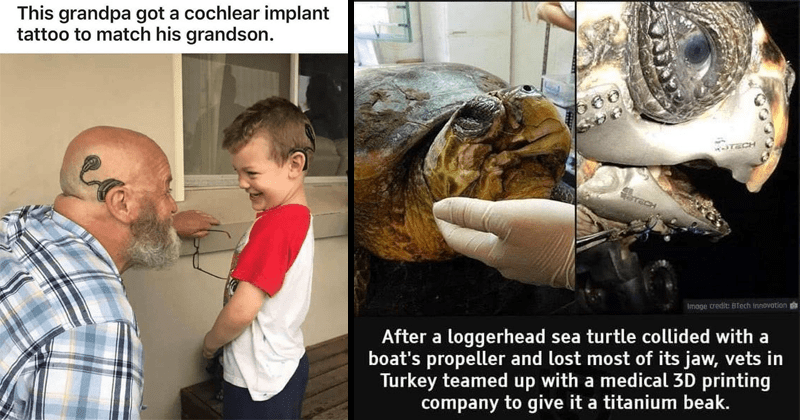 If life has been feeling a lot more bleak lately, rest assured you are not alone. Studies show that depression in US adults has tripled since the start of the Covid-19 pandemic - with women bearing the brunt of that dismal statistic. While hardcore lockdowns may feel like a thing of the past, the symptoms of our international struggle aren't about to just disappear. We're battling some serious pain and anxiety - and that takes a lot of time to heal. We can't offer the world therapy or medication to assuage its suffering, we can try to perk people up with some wholesome and affirming memes. Think of them as a reminder that it's not all bad, and that together we'll be able to get through this. 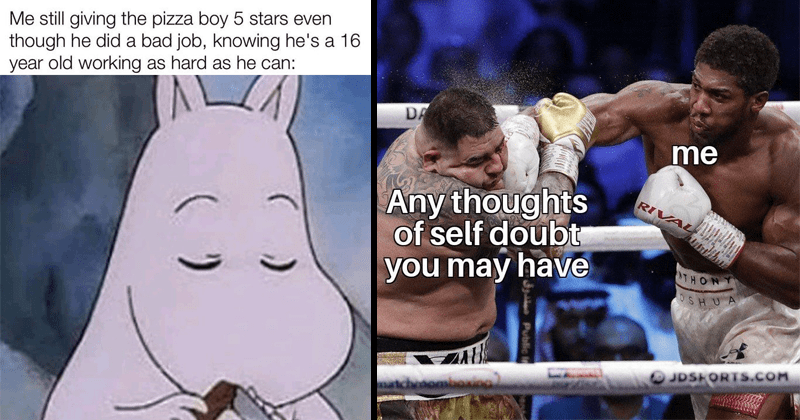 We don't need to tell you that lately it feels like we're constantly being inundated by reasons to be bummed out by the world. Gone are the days of wallowing in self-made misery. Now we've got real circumstances to drag us down. Covid-19. Dissipating social skills. Political unrest. Mass shootings. The joys feel as endless as the ways in which Chrissy Teigen annoys us. While it's important to accept our crappy realities to an extent, it's also important to remember that there are still some little glimpses of light in this bleak world. These sweet tweets and wholesome memes serve as pretty decent proof that maybe we're not completely f*cked. 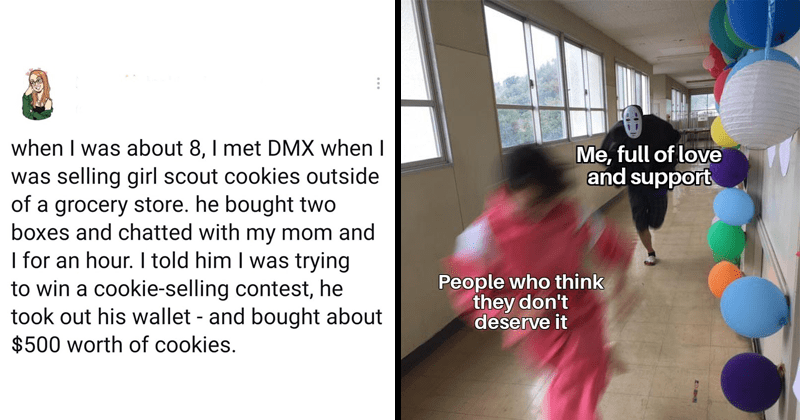 Sometimes they are so imperfect they are doomed to fail. It is a mystery sometimes how people come together, and how they stay that way longer than half a second. And sometimes they are so imperfect in the best way. Those goofy couples that are simply adorkable together. With almost vomitory cuteness and endless photos on social media expressing themselves as only they know how. Or, behind the scenes the girl is yelling at the guy to smile right and complaining that the side she's on doesn't compliment her, even though she took 20 pictures on that side that day. Either or, it's your own perception. These memes are for all the couples out there. Whether you wanna make your boo smile while they are at work, or laugh after you've had a fight, there are some gems that'll do just the trick. 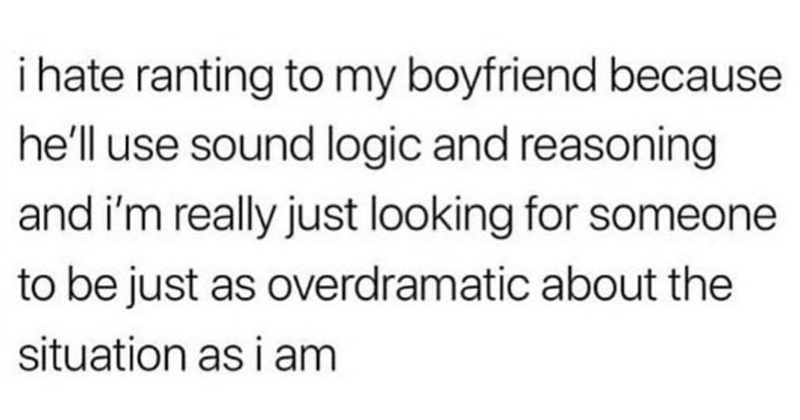 Winter is coming and we all know what that means...seasonal depression! We're gonna need all the warmth we can get, and one easy way to absorb those much needed good vibes is through wholesome images and stories about people being compassionate to others. We've got just the batch of feel-good content to warm you up inside as the days grow darker. If you're in the mood for even more wholesome goodness, we're one step ahead of you. 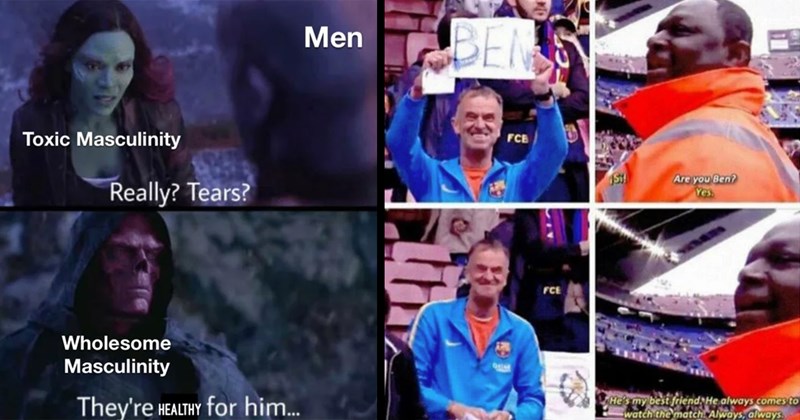 Oh, February. The month when classrooms transform into a pink, red, white, and heart-covered nightmare. While it started out as a minor Christian holiday, Valentine's Day has gradually morphed into a celebration of love and affection over the last 1,500-ish years. The festivities became more akin to current day in 18th century England, where people began exchanging trinkets, sweets, flowers and, of course, greeting cards with their significant others. This iteration spread rather quickly, and by the 19th century people began to abandon handwritten notes and cards for the mass-produced variety. So, as much as people enjoy blaming Hallmark for commercializing February 14th, they were just going along with the times.

These days it seems like people are either for Valentine's Day or against the holiday. Some people relish the opportunity to dote on their beloved - showering them with lavish bright red bouquets, boxes of fine chocolates, and maybe breaking out the bubbly. Some couples have even come to expect expensive gifts on the 14th. But there are also a lot of couples who reject the date for its commercial connotations. They find it hokey and unnecessary. Why should there be one specific day to celebrate a connection? They kind of have a point. Strong and healthy couples should be celebrating each other every damn day.

This year, though, many people will have to forgo the expensive dinner prix-fixe or weekend mini-vacation. This marks the first Valentine's Day where much of the United States is still grappling with the Covid-19 pandemic. What once meant a night on the town has become more of the same: cooking dinner or getting takeout, sitting in front of the TV, and maybe getting lucky. While that may not seem very exciting, it does give couples a chance to reflect on what makes their relationship great - or what makes relationships in general work.

Twitter's way ahead of everyone in that department. On the site, a meme about "perfect couples" has gone viral over the last week, allowing people to share mostly-wholesome stick figure memes, labeled with traits that seem to fit well together. You know, one person who hates cooking, and another who loves to fatten their partner up. The trend started on February 3rd, when user @obiwanfroggi tweeted the happy stick figures with the labels "can't do math" and "can do math." The tweet quickly went viral, inspiring many more of the relationship-centric memes - many that are much, much funnier than the original. Sorry, @obiwanfroggi. While some of the memes stick with the straightforward theme of compatibility, some of them are pretty absurd, or make references to recent pop culture events, such as Phoebe Bridgers trying and failing to successfully smash her guitar on SNL. We're fans of both iterations and we've rounded up the best right here for you. 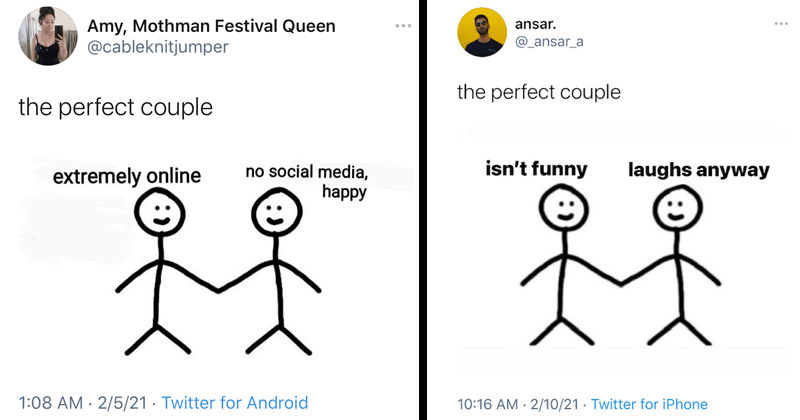 19 Wholesome Posts To Drown Out The Sadness

This selection of tweets, memes, and pics is for anyone who is having a bad day or needs a little pick-me-up. Sometimes when you can't see the light at the end of the tunnel you need a little bit of warmth and perspective. 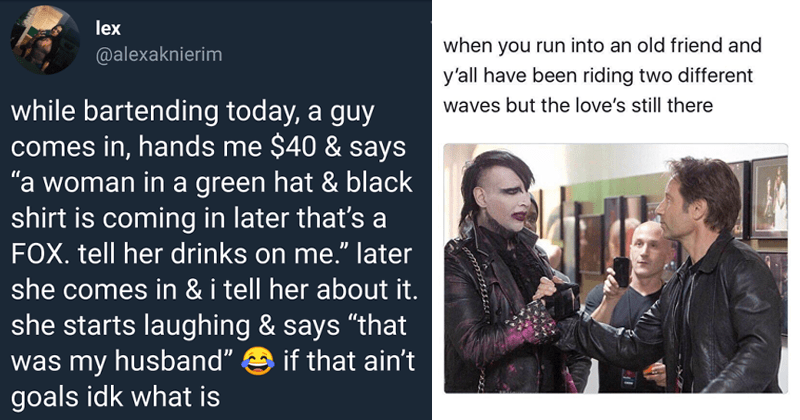 Y'all ready for a little holiday season tearjerker? While this wasn't the best hormonal read in the world, it's definitely nice to read something heartwarming in the midst of life's craziness. This feels-inducing Twitter thread comes to us courtesy of writer and historian @garius. His tale of a grieving widow's connection to the tube announcements has gone viral - and with good reason. It's a refreshing and emotional reminder that people really do care for one another. You're going to need tissues. 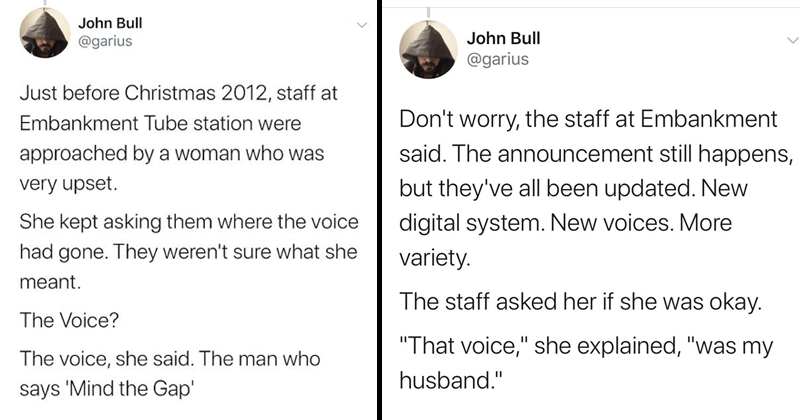 With all the darkness and gloom seeping into our lives lately, it's more important than ever to appreciate what we have and strive to show compassion. People often forget that anyone around them could be potentially going through something really difficult. So even just those small shows of benevolence can make a big difference in someone's life, whether it's a stranger or someone close to you. We've got a great collection of stories, images, and screenshots of sweet moments and human beings caught in the act of being good to others. 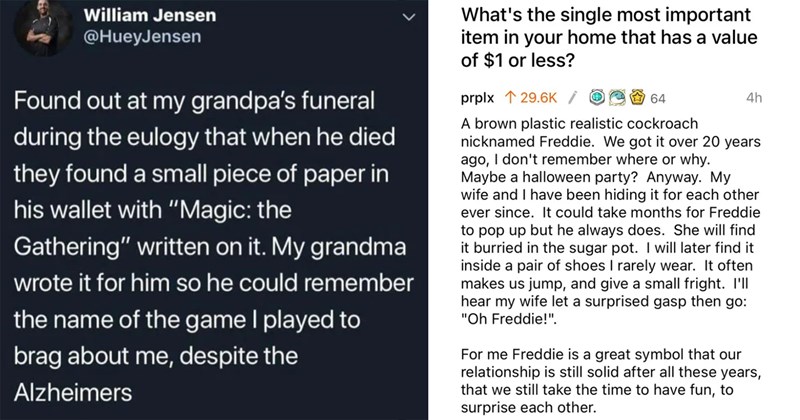 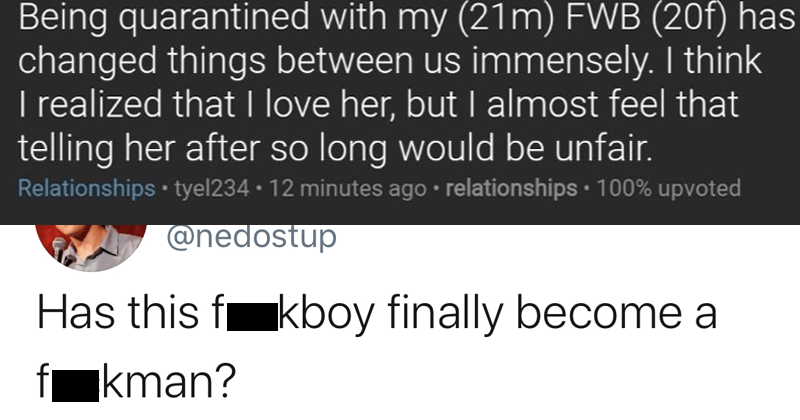