It's true: the good vs. bad comparitive format has been done a million times. But this one, featuring Swole Doge and goofy-looking Cheems somehow feels fresh, even though it's got a bit of a Virgin vs. Chad vibe going for it. The ironic Shiba Inu memes are being used to compare everything from international super powers in different time periods, to film directors such as Martin Scorcese and Quentin Tarantino. While serving up a hot take can be seen as low-effort meme creation, we think that these examples have a lot going for them. After all, almost any meme is better once you add Doge to the equation. 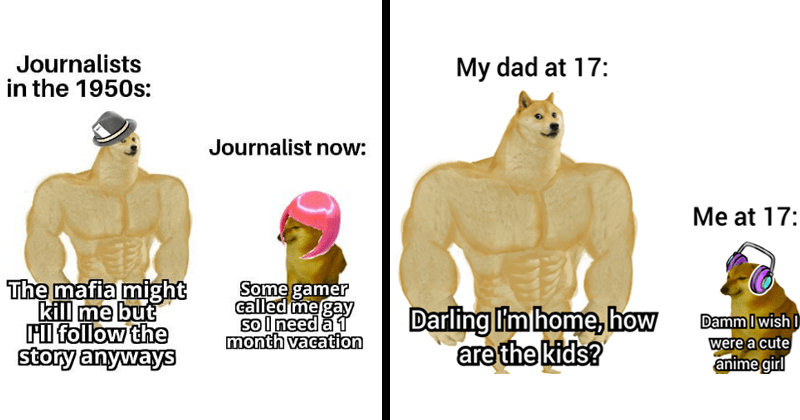 Pssst. Hey. You. Yeah, you. Heard you like memes. And we've got a lot of them. Dumb cat memes. Deep fried memes. Vintage memes and dad jokes galore. We've put a healthy handful together here for you, but guess what? Yeah, we've got more. Happy scrolling. 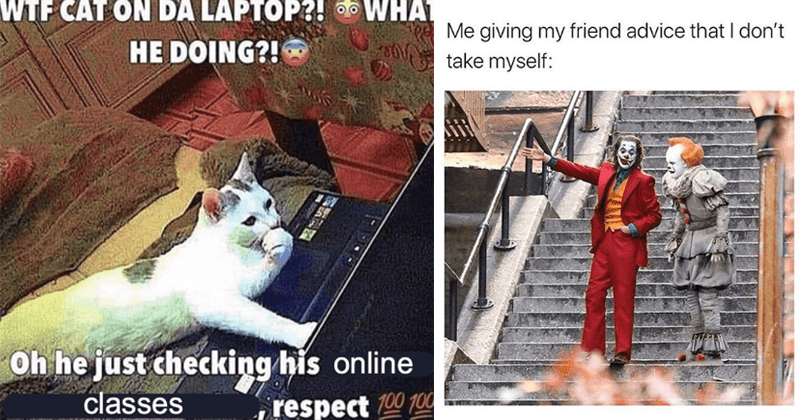 Many of us are having a pretty hard time figuring out what day it is. We're here to help. These memes are perfect for perusal on a relaxing SUNDAY, which used to be the last day of rest before hauling ass to work on Monday. Now we just sit in weird positions and stare at walls. Whatever your level of quarantine boredom, these memes will probably help you out. 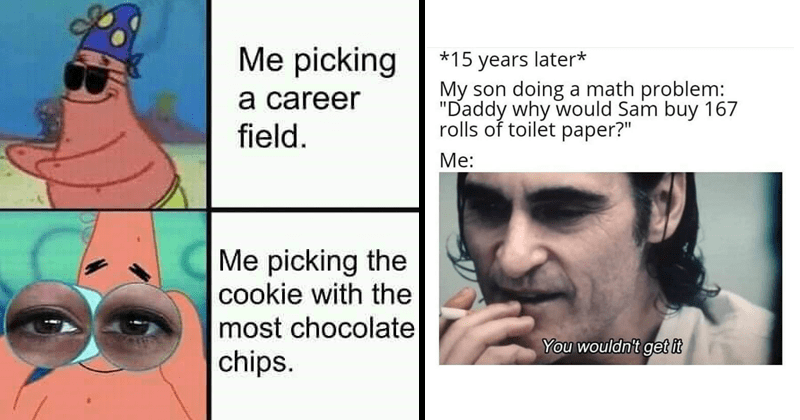 It's official: we're kind of tired of seeing Joaquin Phoenix Joker memes everywhere. So when our colleagues told us the latest Joker format was of the Heath Ledger era, we were pretty damn relieved. The meme uses a scene from The Dark Knight, during which the Joker is dangling Rachel Dawes off the roof of a building. When Batman demands that Joker let her go, the villain says "Very poor choice of words" and promptly drops her to her death. A subtitled screen capture of the moment is being used to indicate that, well, a poor choice of words was chosen for any given situation. And gosh, there are so many situations (especially on the internet) that deserve the poor choice of words stamp. 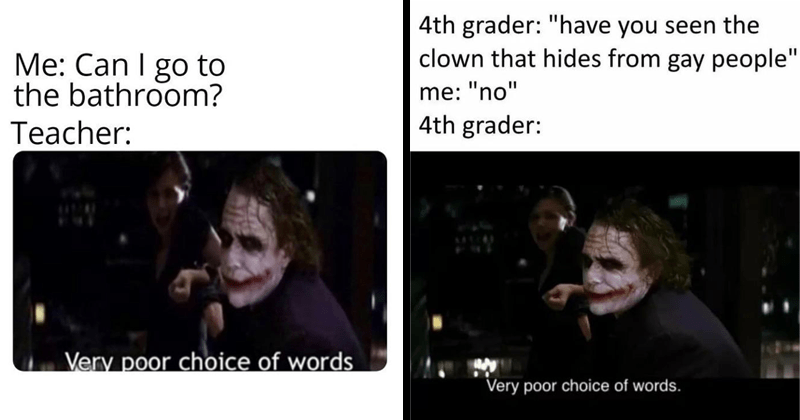 'You Get What You Deserve' Is A Karmic 'Joker' Meme

It's no surprise that a new Joker meme format would pop up after the film won big at this years Oscars. It had already won our award for most meme-able movie of the year. This format comes from the scene in which Joaquin Phoenix's Joker screams "You get what you fucking deserve" at Murray (Robert De Niro) and promptly shoots him in the head. It's mostly being used to meme moments of amusing karmic justice. We've included our favorites, but you can see more and read about the format over at Know Your Meme. 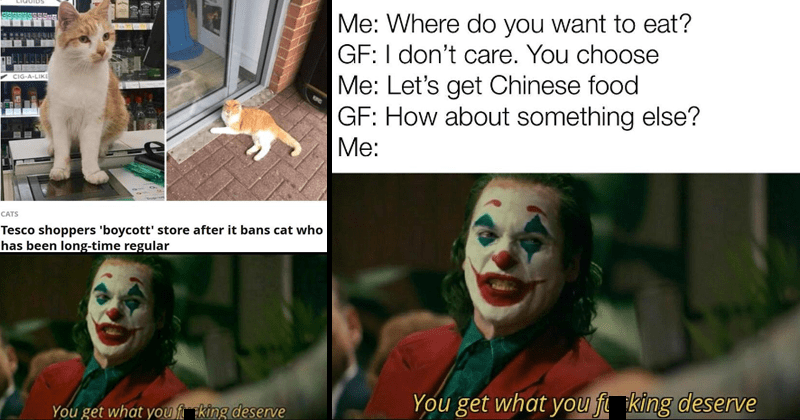 Tasty Memes That Are Perfect For Killing Time (30 Funny Pics)

Happy hump day, y'all! In the words of Jon Bon Jovi, we're halfway there. To celebrate, we've put together another diverse batch of memes to help you exercise your scrolling muscles. There's something in here for everyone - we guarantee it. 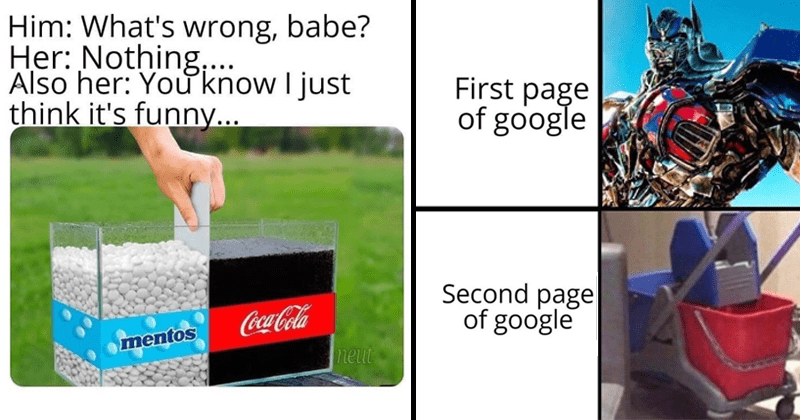 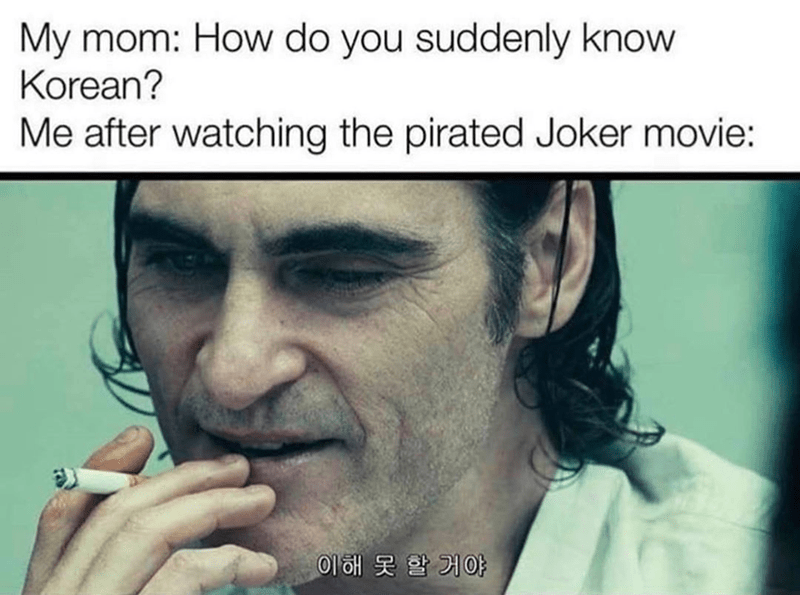 Now I can watch Parasite without subtitles!

Good tidings, fellow meme freaks! We're back with another meme roundup from our favorite subreddit, r/dankmemes. This gallery offers up a nice mix of incredibly stupid shitposts, dank memes, and even a healthy dose of edge. 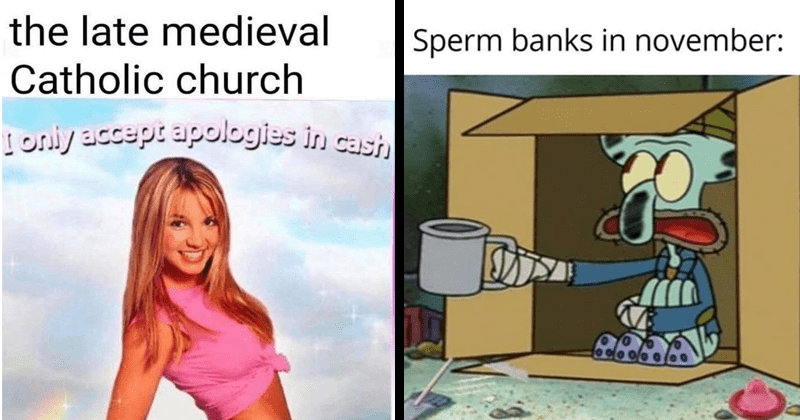 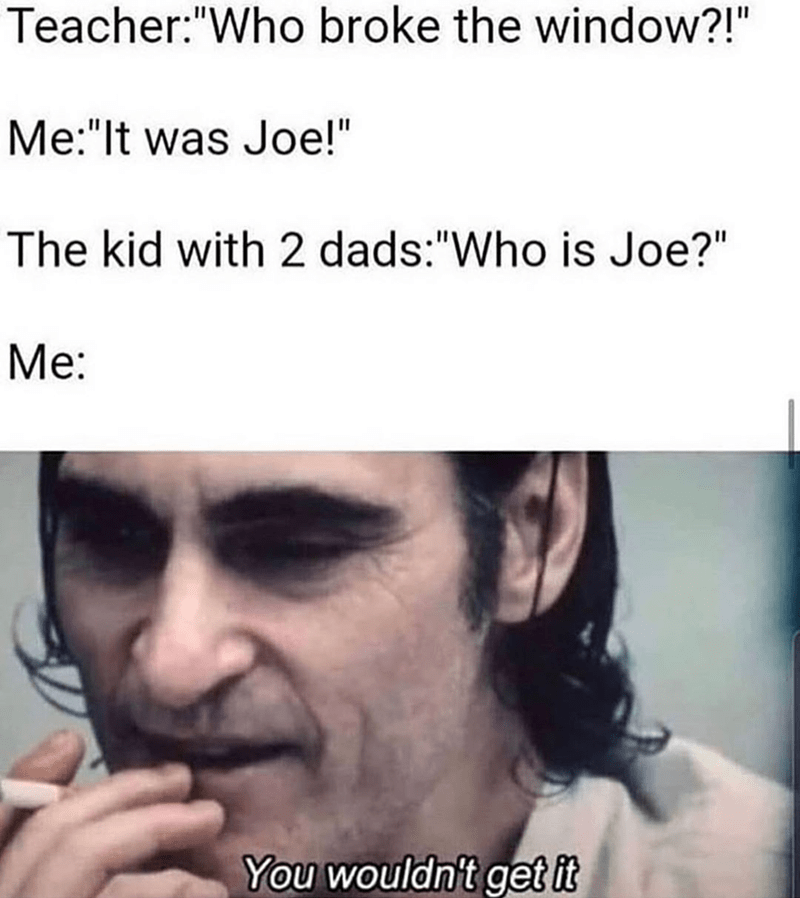 Another day, another Jokermeme. The latest format to catch on on Reddit and Instagram is pretty damn similar to 'Joker Hit By Car'memes, but with a little extra slapstick-y style. The memes feature Joaquin Phoenix's Joker being hit in the face with his own signs, at the hands of some mean teens. The template lends itself to some pretty hilarious situations. Here are our favorites.

Being Misunderstood Is Funny In These Emo Joker Memes

Joker memes have been popping off for longer than the film's been released, and they seem to just keep on coming. These specific Joker memes have a pretty seriously emo vibe. They use an image of Arthur Fleck smoking a cigarette, accompanied by the text "You wouldn't understand." The format has been lending itself well to melodramatic or petty feelings of being "misunderstood." While we would hate to run into these "marginalized" people in person, the memes are pretty damn entertaining. 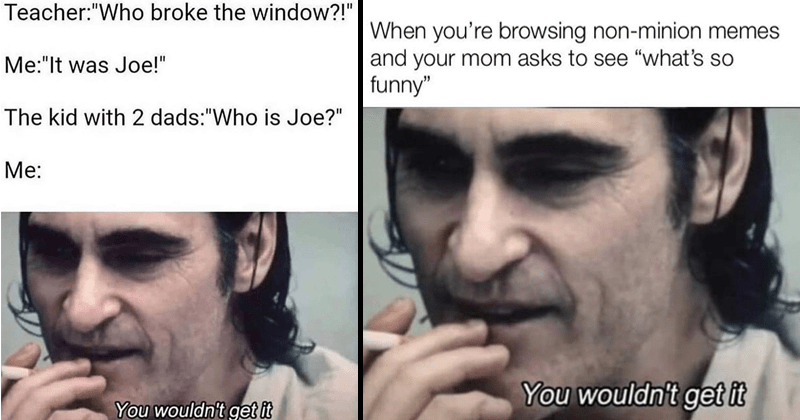 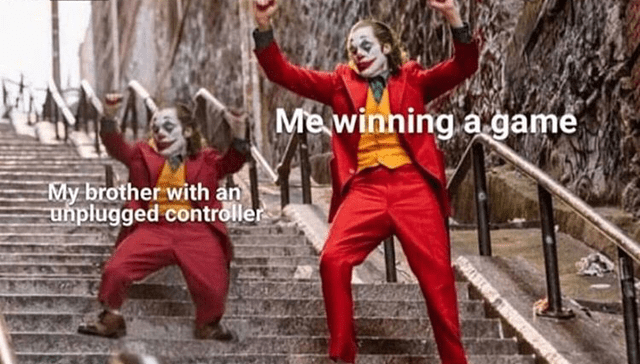 We love to celebrate together.

A Bevy Of Stupid Shitposts To Help You Hate Life Less

Good evening, y'all! Time is an illusion and we are already dead. What's the point of pretending this existence matters? There is none. And there's absolutely no point in pretending that we have better things to do than scroll mindlessly through moderately funny memes. And here is a gallery designed to help you do just that. 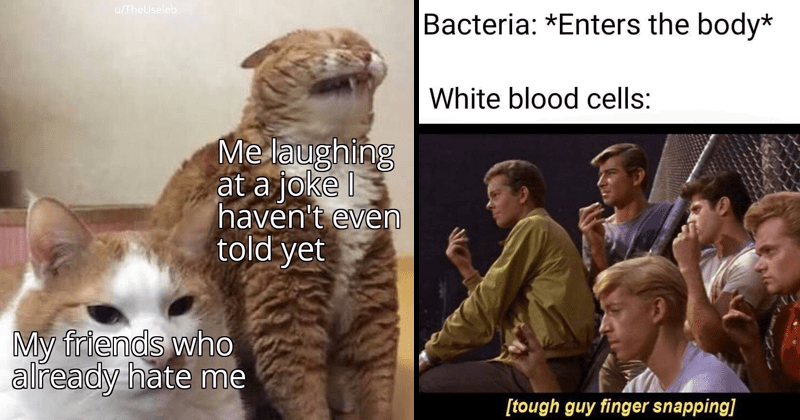 Funky Memes To Help You Free Your Mind

If you're on our boring life schedule, it's Friday night after an unbearably long week of work. And Fridays are for fun. Or at least tiredly scrolling through funny shit in an attempt to feel something, anything. These memes and dumb tweets might help you crack a smile. 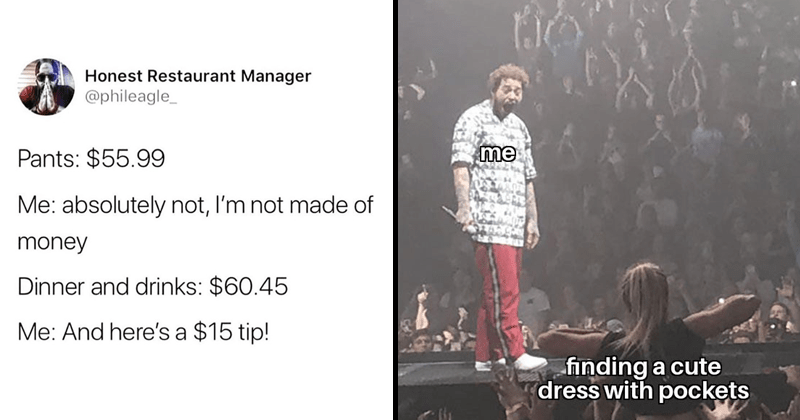 It Really Be That Way 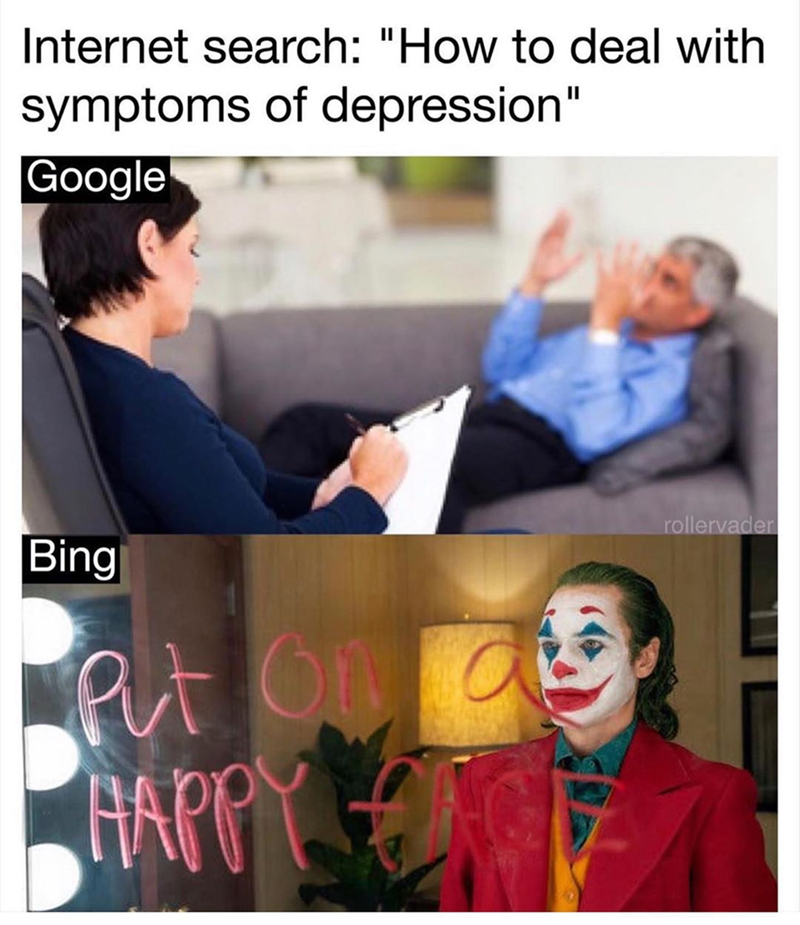 Bing is a scary, scary place. 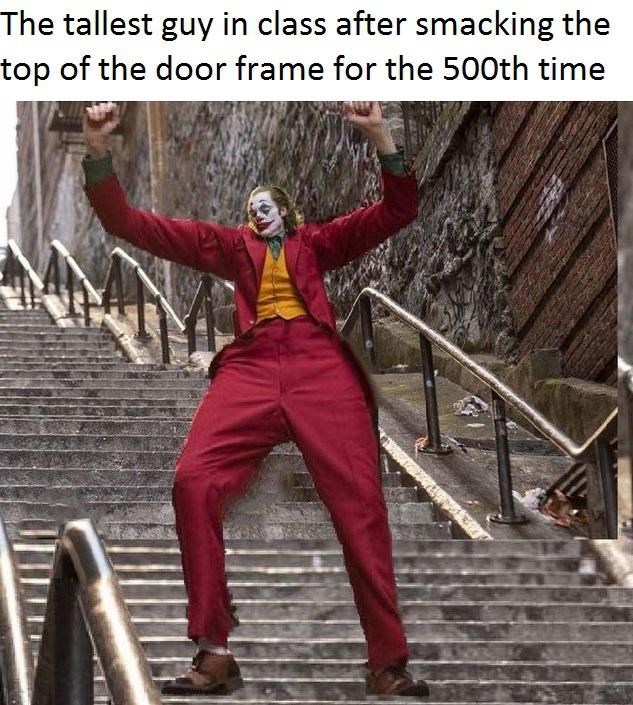 It's the little things.