Skittles Is Getting Roasted For Their Gray 'Pride Edition' Candies

It's Pride month, and we all know what that means. The world is celebrating the  LGBTQ+ community - and brands are bending over backwards trying to show their solidarity. While some companies opt to create rainbow versions of their logos (ahem, Raytheon), others color-fy their home pages or offer special editions of their food products. Apparently - for the second year in a row - Skittles has joined the latter group, re-issuing their "pride packs" of gray candies. The depressing-looking bags claim that "only one rainbow matters during pride" and that Skittles "gives up" its rainbow in support of the month.

??? What the f*ck lmao pic.twitter.com/qJc0LII4io

We're not sure if we blocked the PR stunt out of our minds last year, or if they fell under the radar - but we're not alone in our surprise regarding color being drained from the fruity, chewy candy. Twitter user @jackary (who happens to be gay) shared his disbelief at the gray bags yesterday, which happened to be the first day of Pride month. Though it's undoubtedly important to show support for the LGBTQ+ community, many people  on the internet think this is laughable act of cringeytheatrics. And they're not afraid to say it. Though this may be one of the silliest shows of support from a corporation, it's only June 2nd. There's a lot more time for pandering. And a lot more time to make fun of it. 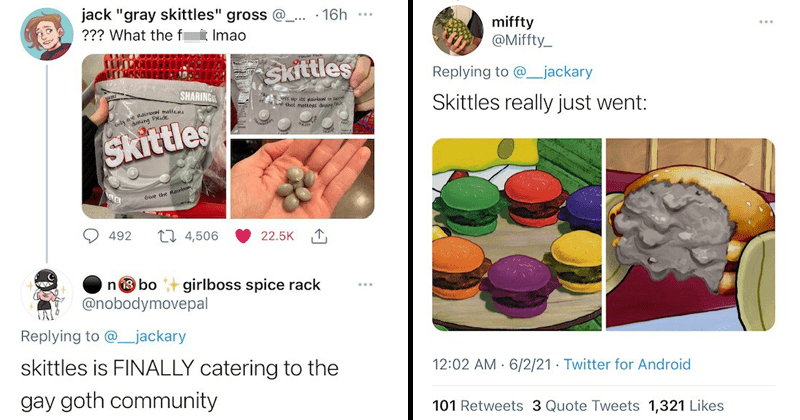