It seems that Steak-Umm woke up today and chose violence. And while it isn't the first time (their Twitter is pretty legendary), this mini-vendetta against Neil Degrasse-Tyson has been too funny to ignore. On Sunday, Degrasse-Tyson tweeted that "The good thing about Science is that it's true, whether or not you believe in it." The sentiment, which is actually pretty dull, caught the attention of Steak-Umm's social media manager, Nathan Allenbach - who turned the platitude into an opportunity to ruffle some internet feathers. While at first Steak-Umm simply replied "log off bro," they later contextualized their stance, explaining that "science itself isn't "true" it's a constantly refining process used to uncover truths based in material reality and that process is still full of misteaks. neil just posts ridiculous sound bites like this for clout and he has no respect for epistemology."

Where the initial sass-filled tweets are fiery and entertaining, the responses are taking things up a notch. It seems that Twitter users are eager to one-up each other with beef-related puns, desperate for Senpai (Steak-Umm) to notice them. And guess what? Many of them succeeded. While some people have jokingly suggested that the account take on Stephen Hawking (RIP), we really would love to see them go after some more public figures. While we never expected to support a brand's social account, let alone one that shills processed meat, we've really been enjoying Steak-Umm's social media development and can't wait to what kind of mischief they cause in the coming months. 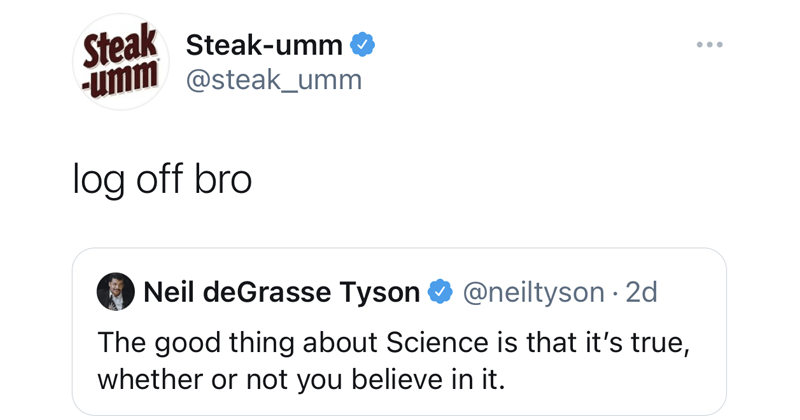