Is one's life just a series of random and chaotic events, or are there underlying patterns that determine the things that happen to us? In the late 1050s, Meteorologist Edward Lorenz was skeptical of linear statistical models of meteorology and pioneered weather and climate predictability through his discovery of deterministic chaos—the theory that though chaotic systems appear to be random, they contain underlying patterns and feedback loops which can be used to explain evidently unpredictable outcomes in weather. And so a small, seemingly inconsequential change to initial conditions can lead to significantly different results. In his 1963 paper entitled Deterministic Nonperiodic Flow, Lorenz claims that "two states differing by imperceptible amounts may eventually evolve into two considerably different states...If, then, there is any error whatever in observing the present state—and in any real system such errors seem inevitable—an acceptable prediction of an instantaneous state in the distant future may well be impossible...In view of the inevitable inaccuracy and incompleteness of weather observations, precise very-long-range forecasting would seem to be nonexistent." Although Lorenz's deterministic chaos theory was focused on connecting cause and effect in weather to the general instability of Earth's atmosphere, the 'butterfly effect' metaphor has been used in different areas, such as quantum mechanics and (oftentimes incorrectly) in fiction. In Ray Bradbury's 1952 short story A Sound of Thunder, where time travel is a mundane reality and wealthy tourists can travel back in time to hunt dinosaurs for sport, one character is warned by his 'Time Safari' guides not to interfere with events from the past more than necessary, since small causes can snowball into catastrophic effects over time. At one point the character accidentally falls in the forest, but doesn't think much of it. When he returns to the present, he notices significant differences in the reality he once knew and eventually discovers a butterfly crushed under his shoe. The death of one butterfly millions of years ago had caused a catastrophic rift in time. Though this is a pretty outrageous interpretation of chaos theory, it's easy to go down a rabbit hole of wondering what other outcomes might have happened if seemingly minuscule changes to our own past life events were possible. In hindsight, it's easy to appreciate those random decisions that help us avoid disaster, but the implication that every decision you make potentially has a life or death outcome can drive anyone crazy.

We've got a bunch of examples of times people 'dodged a bullet' by making small decisions based on a feeling, or sometimes nothing at all. One person recounts the time they randomly decided to cancel a flight, which happened to be Malaysia Airlines flight 370. What at the time seemed like a mundane decision turned out to be a life-saving one. Not all of these anecdotes describe such dire mortal events—most of these stories are about the sort of times when you feel like you initially missed out on something good, but later realize you avoided an incredibly undesirable situation, like a job for a company that eventually goes out of business, or a date who ends up revealing themselves to be a psycho. You gotta wonder—were these people just lucky, or are there underlying patterns at play? 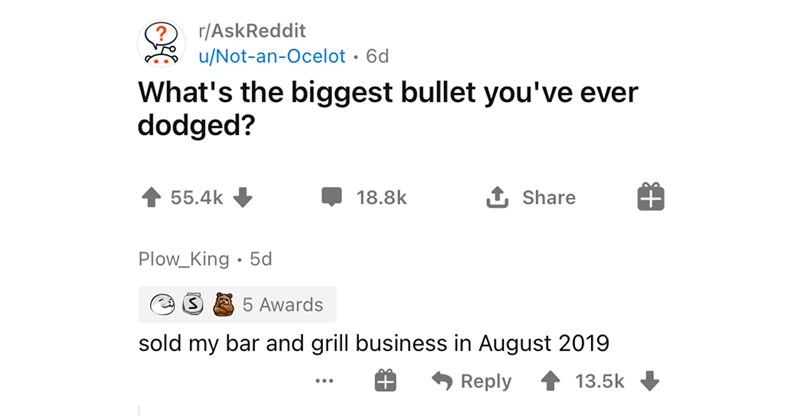 People Are Thirsting For Waluigi Again, So Here’s A Selection Of His Most Cursed Memes