If you're at all connected to what's going on in the world, you're probably aware that many people in the United States seem to be worried about a gas shortage. Here in New York, the last time we had a gas shortage (after Hurricane Sandy) was pretty debilitating. Lines of cars sometimes went for miles, filled with worried and agitated drivers - and then, of course, there were the ones who had to find a way to navigate around them. This time it's not a natural disaster that's causing mayhem. This gas panic is a direct result of last week's cyberattack on Colonial Pipeline, a major pipeline that provides gas along much of the East Coast, and all the way to Houston.

Colonial Pipeline announced today that they've restarted their pipeline system and have resumed deliveries, but that can't undo the panic and the memes its inspired. The ransomwear attack influenced hordes of frantic drivers in the Southeast to stockpile gasoline in whatever containers they had available - a move that evoked the country's toilet paper crisis from the beginning of the Covid-19 crisis. While several photos and videos of people stockpiling gasoline in unorthodox containers have been flying around, none have faced as much ridicule as a photo and video of people attempting to collect gasoline in plastic bags.

And this is how someone thinks they should get gas...🙄 #gasshortage pic.twitter.com/XT7APSI9rM

Though both the photograph and the video are real, neither of them were taken in the last week. In the trunk? Gasoline that two men had attempted to steal, not in the United States, but in the Mexican state of Puebla. The video was taken in December of 2019, and according to Snopes, it depicts a woman doing some weird sh*t in Houston, Texas. Despite the misconceptions, people on Twitter have been eating up the idea that people around the country are filling up bags with gas. It even got so bad that the US Consumer Product Safety Safety Commission published a thread urging citizens not to horde gas in this unique manner. Even more entertaining than the thread (which should not exist) are the roasty tweets that users are firing out left and right. We know it's kind of shitty to make fun of people who might have a screw loose, but god, we can't help but enjoy the spicy savagery. 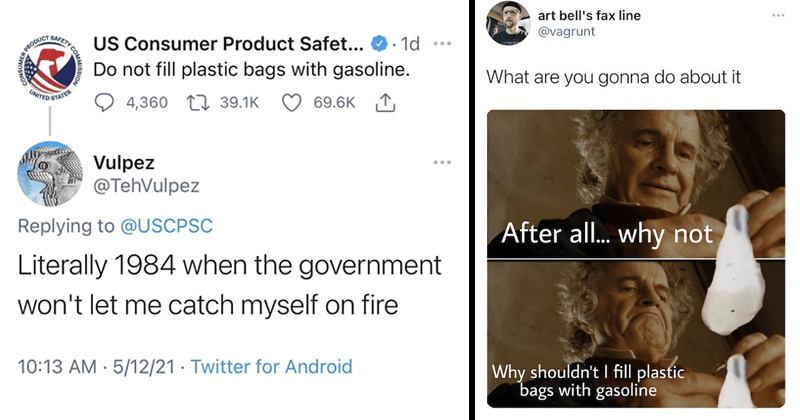