Well, it's official. Chrissy Teigen has thrown in the Twitter towel and deleted her prolific and controversial account. The model/actress was a very loud voice on the website, but that visibility has not really worked in her favor. Over her ten-plus year Twitter career, Teigen often found herself under scrutiny. There were the trolls linking her to Jeffrey Epstein. Her weirdly mean past with Courtney Stodden. Despite her strange bullying of the ex-pageant queen, Teigen has been loudly complaining about being attacked by vicious internet trolls. While we're not advocating for any kind of cruelty, Teigen's Twitter account has been a consistent and tone-deaf display of privilege. It's hard to take a "victim" seriously when they're tweeting about accidentally buying $13,000 bottles of wine during a pandemic that's caused some serious financial damage within the working class. This out of touch behavior and Teigen's attempts to seem relatable rubbed a lot of Twitter personalities the wrong way. And now that she's gone? The jokes are coming out in full force. 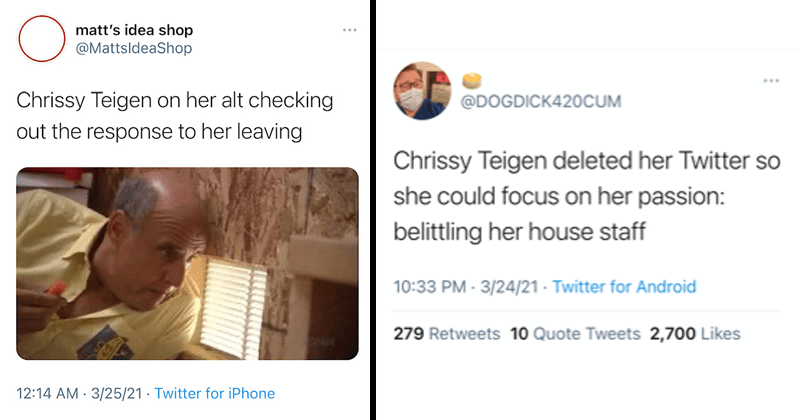