A Wild Bunch of Memes for the Banishment of Boredom

Ever feel like time is slipping through your fingers? Even though you don't own your time at all? When work, responsibilities, and family factor into things, it can seem as though there's nothing left for self-care and humor. And that's a goddamn shame. Instead of allowing these patterns to plunge you into some kind of monotonous, fun-less existence, we want you to take charge and seize the memes. Seize the fun. Seize a little moment of indulgence. You deserve it. 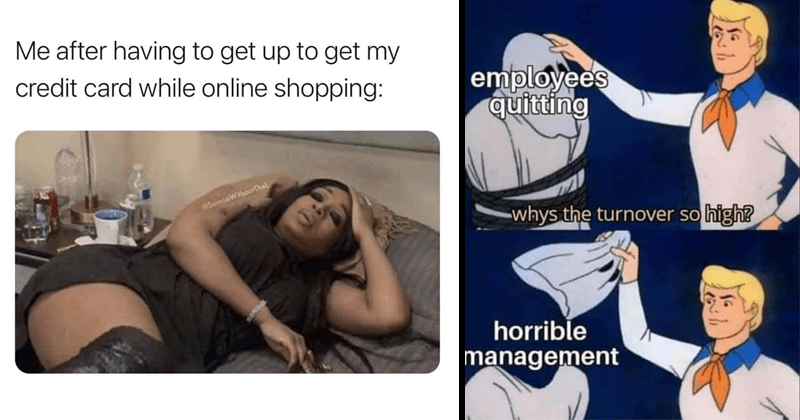 A Menagerie of Memes With a Multitude of Themes

If you feel like the weight of the world is on your shoulders, and that pleasure is but a thing of the past, it's probably time for you to step away from whatever pressures are hurting you and take a nice long break.  We're usually of mind that nothing really matters, but even if there are things you care about, these memes will help lighten your spirit and feel a bit more, well, carefree. Self care and healing can be whatever you want, even mindlessly scrolling through a variety funny pics until you fall asleep. 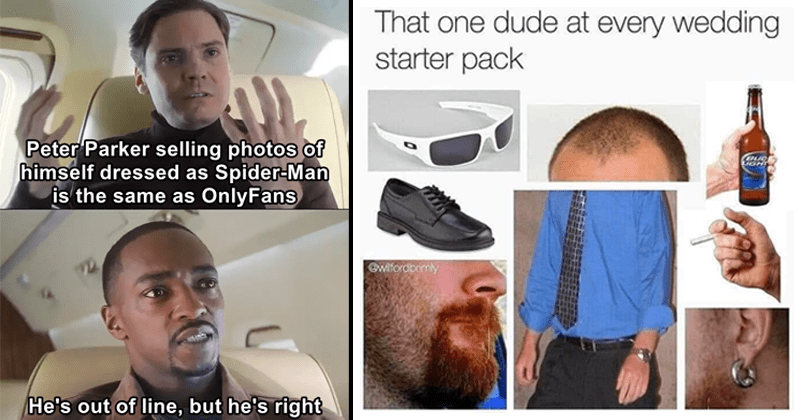 Memes to Aid in the Never-Ending Battle Against Boredom

For many long years we have fought the battle against boredom. It was once a war in which only the rich and privileged would partake. Collapsed on their chaise lounges, draped in furs and silk, bloated from wine and cheese, the wealthy would submit to languidness. Perhaps even afflicted with gout. As the novelty of each jester and dancer waned, the boredom festered. But at least they had wealth. At least they had power.

Since technology has rapidly changed humankind, making convenience less of a privilege and more of a norm, the everyman has become more acquainted with the listlessness that comes with options. While we're not being fed literal grapes or being fanned by servants, there are drastically more ways to spend our excess time. And somehow, this causes indecision and idle apathy. When we're feeling the pain, we usually turn to the cornucopia of information that is the internet. And more often than not, we're in search of memes. If that describes you, well, you're in luck. We've got a whole lot of that ammo for the constant conflict we've been describing. Godspeed. 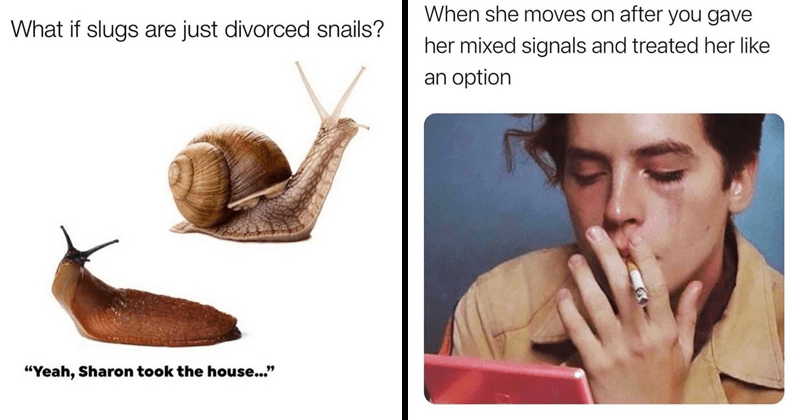 Things we are "canceling" temporarily today:

- The crushing weight of our existence

How are we canceling this sh*t? By tuning out and tuning into these tasty memes. 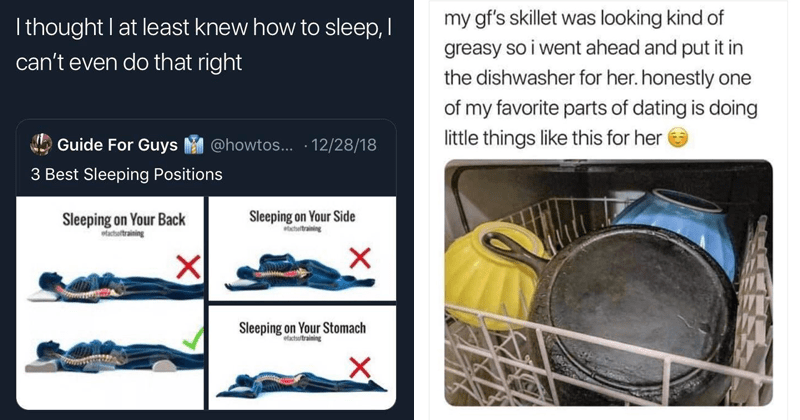 Buckets Of Memes For Bored People

Huzzah! It's finally Wednesday. Also known as Hump Day. The middle of the godforsaken week. The day we start to see the light at the end of the tunnel. It might be dim. It might seem far. But goddammit, soon we are going to be free. To help that time move faster, we've put together this fun selection of entertaining memes and tweets. We can't actually fast forward time, but at least we can make its passing a little more pleasant. 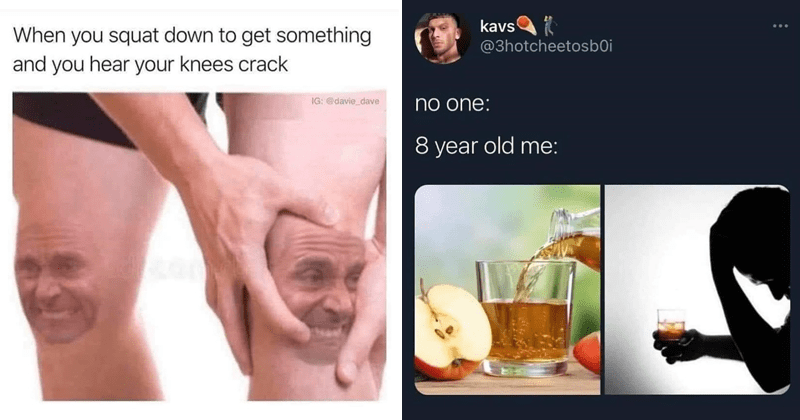 Happy Friday, friends and frenemies. You've officially made it through another muddled week of insanity. Between Covid-19, the insanity of politics in the USA, and the problems we had prior to these disasters, it's amazing we're able to function at all. All the craziness kind of makes it hard to muster the energy to do very much at all. If you're feeling sapped of motivation, at least there are memes to lift you up a little bit. And we've got a big old gallery of them right here for your convenient perusal. 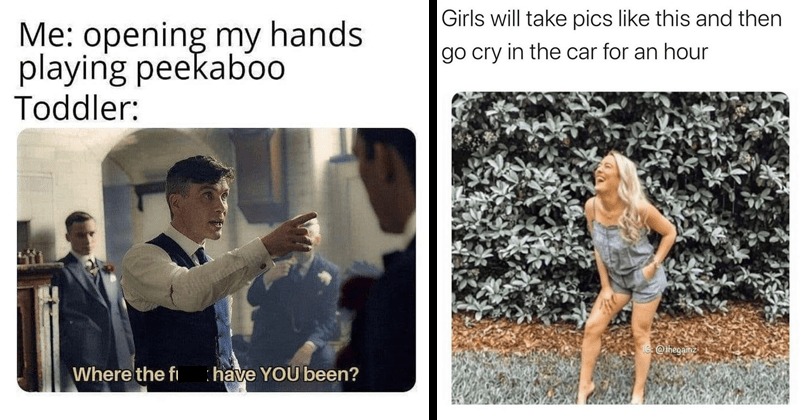 Funny Memes For Wiling Away The Minutes

TGIF, y'all! We're back with another batch of memes for whenever you need them. Bored on public transit? Scroll through some memes. Avoiding responsibilities? You know what to do. Insomnia? Boredom? Desperately need a distraction? We, and these memes, are here to help. 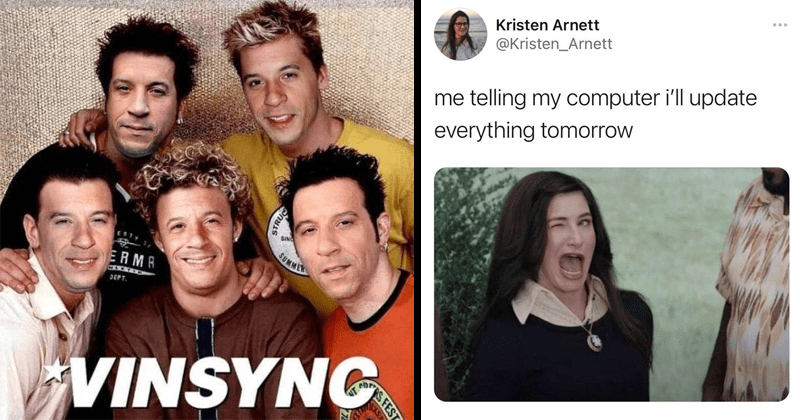 Dank Christian Memes That'll Fill You With The Holy Spirit

Christianity has been a thing for about 2,000 years. It's only natural that the world's most popular religion would get meme'd to oblivion. We've rounded up some of the more dank Jesus-related memes that anyone, even atheists, are sure to appreciate. 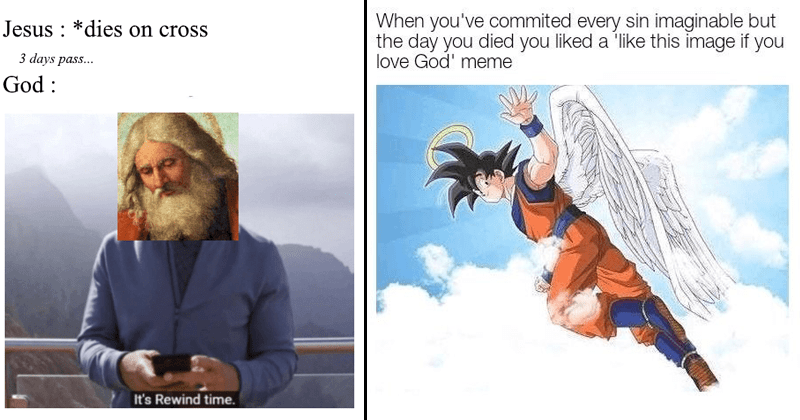 When boredom strikes, what will you do? Do you have someone to turn to? Or are you left to your own devices? Boredom can strike at ANY TIME. It's very important to be prepared, to have a plan. And unfortunately, you can't rely on people to quell the tedium. You need to depend on yourself. That's why we're here to promote memes. When the going gets boring, they're our number one solution. You don't need money to enjoy them, and you don't need a friend. Memes are the self-sufficient humor-lover's antidote to monotony. And we've got a whole lot of them right here for you. 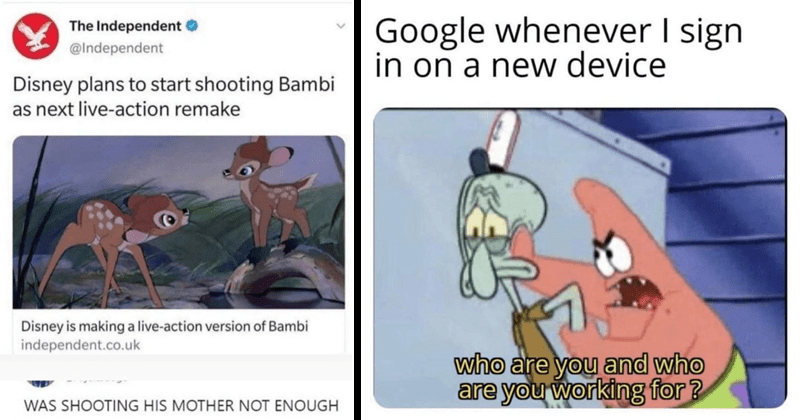 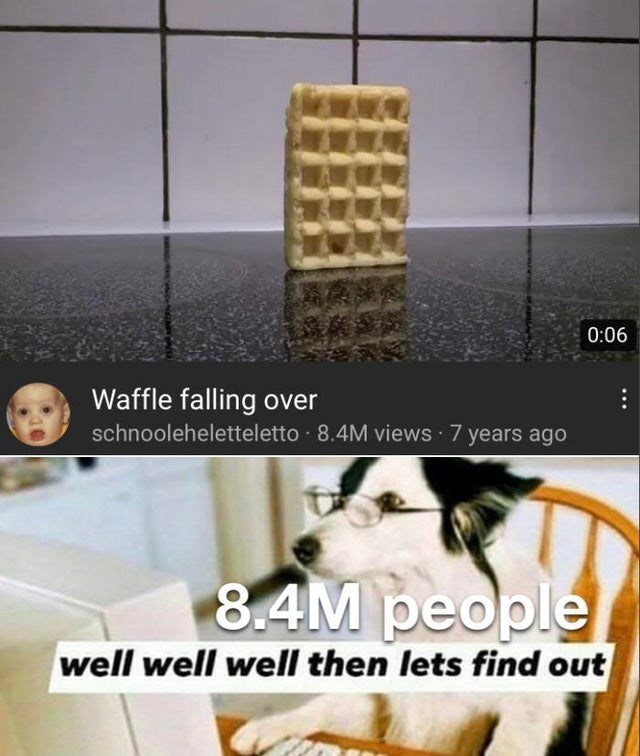 When the pesky feeling known as boredom comes a-knockin' it can be hard to decide how to eliminate it. Do you bite the bullet and do something responsible like clean your home or organize your filing cabinets? Do you decide to fill the void with some exercise? Or turn the brain off further with some television? These are all worthy options, with some being more palatable than others. We prefer to scroll through the internet, looking at the latest gossip, and, of course, a whole lot of memes. If these shareable tidbits of humor appeal to you too, then we've got the amusement you've been looking for. 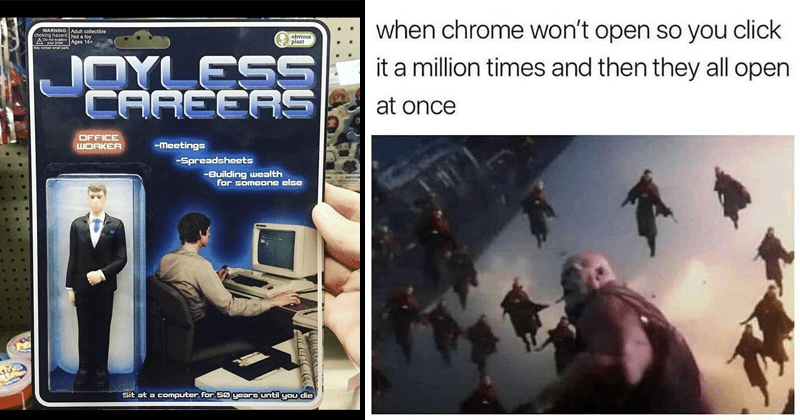 It's perfectly normal to want to avoid responsibility. Don't let anyone tell you otherwise. When so much of our time is signed off to other people (ahem, job), the urge to reclaim it tends to grow. That's why so many people go to sleep later than they should. There's actually a Chinese term for it - "Revenge Bedtime Procrastination." People literally feel like they need to stay awake to regain control over their time. It's a phenomenon that we relate to, though we by no means endorse it.

Instead of staying up until the wee hours out of spite, we recommend setting aside chunks of time during the day for things that make you happy. That could mean indulging in a fancy cup of coffee, or perhaps a quick workout to get ones blood flowing. It can also mean scrolling through some funny memes. If you're in the latter camp, we've got just the gallery for you. 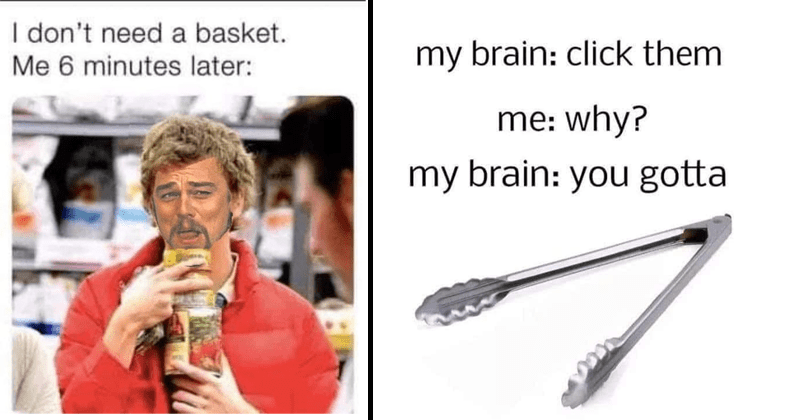 Good tidings, internet trollers and travelers. On this beautiful Tuesday we are absolutely honored to have the opportunity to share more of our ever-growing collection of relatively amusing memes and tweets. Some of them are dumb. Some of them are relatable. Hell, some of them are slightly offensive. But they're all here to help rescue you from boredom. Enjoy. 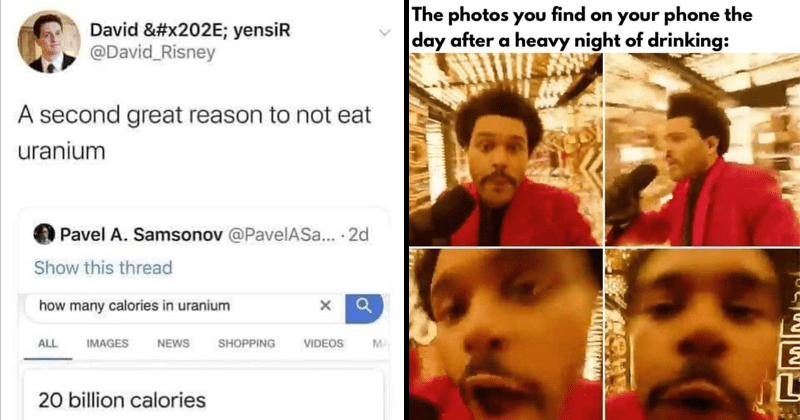 Tired of staring into the void on your day off? Why not try staring at MEMES. Why memes? They've got relatable humor, make a mockery of our depression, and help us take our minds off reality. While these may not be the best memes you've ever seen, they're probably not the worst. And they're probably better for your mood than whatever else you've been doing to pass the time. 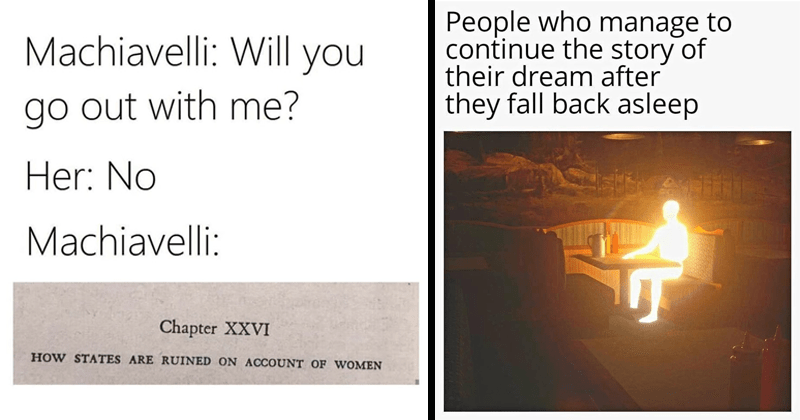 Memes & Tweets For Your Procrastination Pleasure

Ever want to give responsibility a big, angry middle finger? That's how we spend most of our waking life. Though some might say procrastination is ruining our lives, we'd rather spend this time having fun than worrying about what killjoys think - and what our "bosses" "expect" "us" "to" "do." We're here for a good time, and according to our lifestyles and Covid-19, not a long time. Why not enjoy it with some memes? 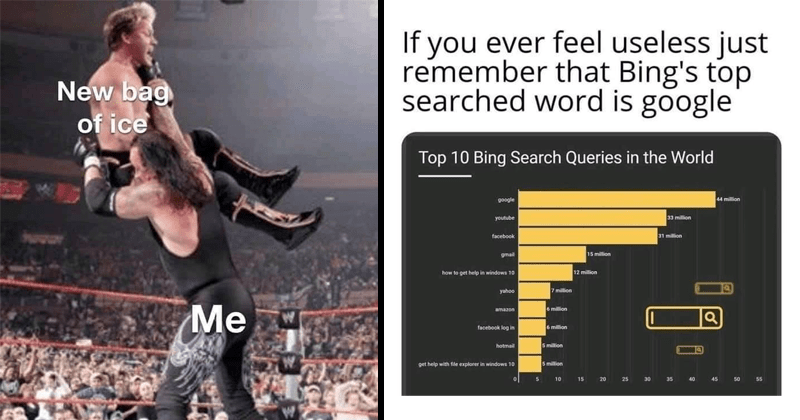 The daily grind of work can really start to wear on you after a while. After all, we're all forced to put in 40+ hours a week just to survive in this hellscape where we're all just working to put money in The Man's pocket. Anyway, please enjoy these work-related memes that'll help you ruminate in your misery! 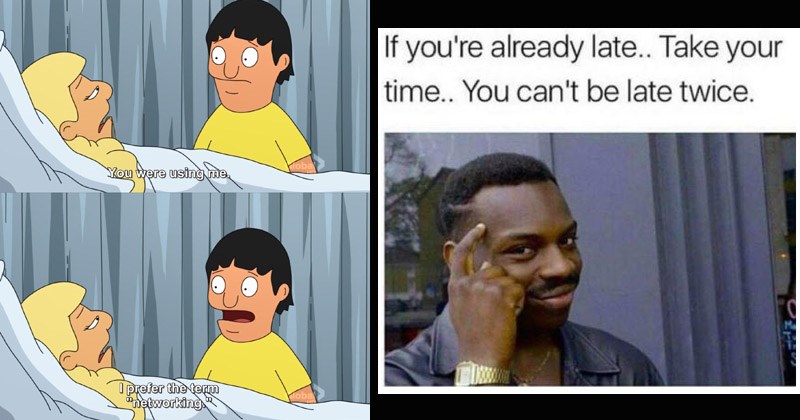