'Apology Dinners' Are The Latest Concept To Perplex The Internet

In my family, apologies take time, and are delivered begrudgingly at best. They usually come in the form of a text, or an awkward exchange in a car or a doorway. These apologies end abruptly, with the issue swept under the rug for the victim to simply get over at their own pace. Normal, right? Well, today much of the internet learned about another form of apology. Instead of a simple back and forth with a loved one, apparently there are people who host "Apology Dinners." The concept was the talk of Twitter yesterday, for good reason.

In a now-deleted Reddit post, a user asked the r/AITA (Am I The Asshole) subreddit if they were in the wrong for organizing their sister's "apology dinner." The post (which was inspired by a much sadder apology dinner thread) goes through great effort to explain the concept of a potluck dinner, but carries on to the family drama without pausing to demystify this bizarre custom. After it was shared on Twitter,the tale went viral, inspiring many confused, surprised and critical reactions.

While we're not sure we've ever met anyone who engaged in this kind of ritual, OP explains in a comment that they are from Romania, and that it's a common occurrence in their culture. Being that we've never been to Romania, we'll have to take their word for it. We'll also have to take some inspiration from the story to raise the bar for everyone who has ever wronged us. Next time I hear my roommate having sex, I'll expect him to feed me a lobster dinner. It's only fair. 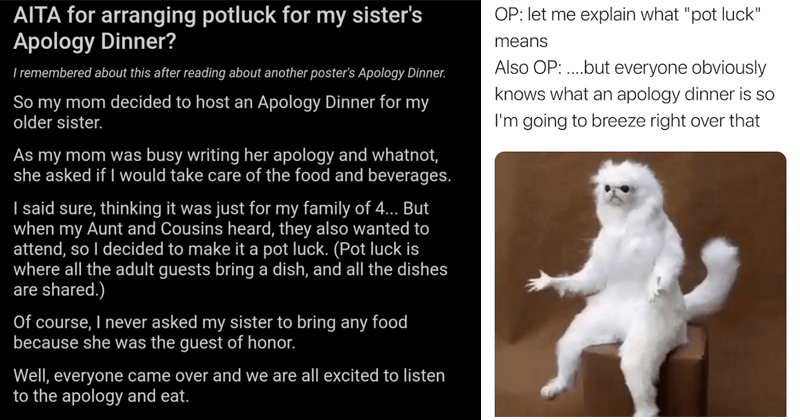