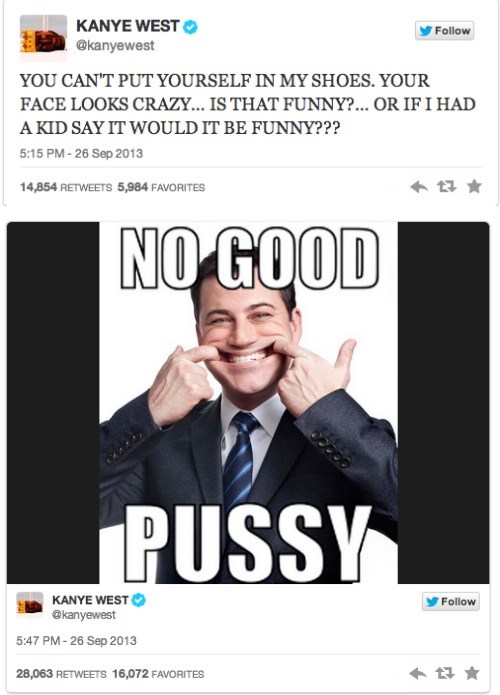 After Jimmy Kimmel ran this spoof of Kanye West's infamous interview, the rapper took to twitter to vent his rage. Hitting the talk show comedian with blows about his love life and 'weird face'. He even made some memes about the former Man Show host. To see Kimmel's response, head on over to Uproxx.

We've All Seen Celebrities on Jimmy Kimmel Reading Mean Tweets About Themselves, But What About School Teachers?

Some of them can get... shall we say... vitriolic?

Check out the rest of the Mean Tweets installments!

You Did NOT Just Make Me Miss Madonna!

It's Time for Another Edition of Mean Tweets

Jimmy Kimmel has released his latest batch of mean tweets as another all-music edition just in time for the 2015 Grammy Awards on Sunday. 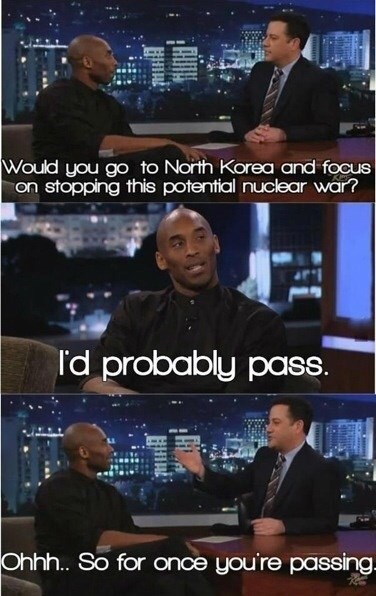 Some People Still Don't Know Much About March Madness

Now That the NBA Season is All Over, Let's Put a Bow on It by Giving NBA Players Their Very Own Edition of 'Mean Tweets'

With All the Unnecessary Censorship That Jimmy Kimmel Doles Out, It's Time He Got Some of His Own

In this latest edition of Lie Witness News, Jimmy Kimmel sent his crew to Hollywood Boulevard, where fans were gathered to catch a glimpse of Justin Timberlake, and ask them what they thought of JT's performance at the Emmys on Sunday.

Now, you'd think people who would take time out of their day to go and see a celebrity might know quite a bit about said celebrity.

... Oh, and by the way, Justin Timberlake didn't actually perform at the Emmys.

President Obama receives his fair share of criticism online, but he’s embracing all the hate in a new edition of “Mean Tweets” on Jimmy Kimmel Live.

What him react to a #ThanksObama and someone who does’t approve of his dad-jeans style.

“Is there any way we could fly Obama to some golf course halfway around the world and just leave him there?” writes one girl.

You can also watch Kimmel’s post-Mean Tweets interview with Obama below, in which he says he didn’t think those messages were very mean at all.

“You should see what the Senate says about me,” he says.

He also talks about why he still has a BlackBerry and how he doesn’t actually use Twitter himself.