There's been a lot of talk about GQ's recent interview with Robert Pattinson. The piece really highlights the actor's...eccentricities, from his amusing self-portraits to how he copes with quarantine anxiety. It's a charming interview and solidifies Pattinson's likable nature. But the most charming albeit horrifying aspect of the one-on-one? According to Twitter, it's Pattinson's shocking attempt at making a "microwave pillow pasta".

Allegedly (we can't tell if he's trolling), Pattinson has long been seeking a way to make a handheld pasta for fast food.

"Last year, he says, he had a business idea. What if, he said to himself, "pasta really had the same kind of fast-food credentials as burgers and pizzas? I was trying to figure out how to capitalize in this area of the market, and I was trying to think: How do you make a pasta which you can hold in your hand?""

Pattinson decided to attempt to make his "Piccolini Cuscino" (little pillow)  prototype for his interviewer, Zach Baron. The ingredients include cornflakes, "any sauce", 9 pieces of pre-sliced cheese, and lastly, a lighter to achieve a "flambe" effect. And sugar. The heinous "recipe" is now the topic of many a tweet and twitter meme. People are even attempting to recreate the sacrilegious dish. We're okay with the mystery. But we've put together the best reactions right here for you. 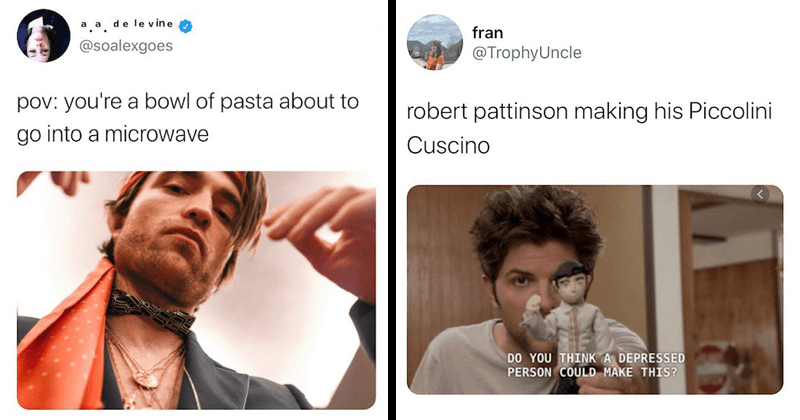