Lil Nas X, of "Old Town Road" and "Panini" fame, came out as gay in a series of cryptic messages on the last day of Pride month. The genre-defying rapper tweeted last night that people should listen more closely to "C7osure." The lyrics are decidedly bent on living ones truth, and make a whole lot of sense now that the rapper has opened up about his sexuality.

"Ain't no more actin', man that forecast say I should just let me grow
No more red light for me, baby, only green, I gotta go
Pack my past up in the back, oh, let my future take a hold
This is what I gotta do, can't be regretting when I'm old"

In addition to demystifying the lyrics of "C7osure," Lil Nas X pointed out the cover artwork for his EP "7" in a tweet that reads "deadass thought i made it obvious." The rainbow-centric artwork makes a lot of sense now.

The response to the liberating announcement has been overwhelmingly positive, with fans and allies tweeting enthusiastic support for Lil Nas X. People are even roasting anyone that would have an issue with his coming out. We're 100% with the star and can't wait to see how he continues to be a walking argument for individuality. 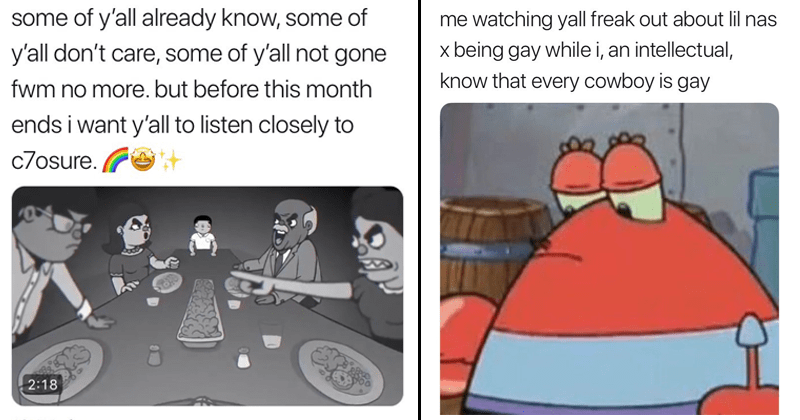