25 Amusing Anecdotes From The Insular World Of 4chan

On October 1, 2003, fifteen year old Christopher 'Moot' Poole launched an anonymous, image-based bulletin board called 4chan, not yet knowing what an impact the modest web experiment would have on internet culture in the coming years. Today, one can find a variety of boards on the website dedicated to niche interests, including anime & manga, cosplay, comics, video games, political incorrectness, quests, and a vast array of NSFW content. But at the time of its launch, 4chan hosted only one 'random' board called /b/. Despite its simple beginnings, 4chan hasn't significantly changed in its nearly eighteen years of existence. Unlike other notable message board websites like Reddit, you don't need to register an account to participate (in fact, there is no account registration), you must upload an image to begin a new thread, and anyone can post anonymously. Although there are a list of general site rules and specific rules for each board that users must obey in order to avoid getting banned, to this day the site is one of the more uninhibited corners of the internet. Because of this, 4chan has been the subject of much controversy over the years. As the terminally-online know all too well, the ability to post freely and anonymously will inevitably yield disturbing and ugly results. But despite the fact that many view 4chan as a grotesque reflection of the darkest aspects of the human condition (as it very well may be), it's impossible to deny that the infamous website has influenced the internet in ways that no other web-based 'community' has. Out of the boards of 4chan rose rage comics, lolcats, and duckrolling (the precursor to rickrolling). One could argue that 4chan was the birthplace of the internet meme as we know it. 4chan may be a fringe online ecosystem shrouded in mystery to those who consume their memes from the safety of Twitter or Instagram, but some research has suggested that most of the memes in circulation originated from /pol/, which raises the question—do we forgive 4chan for the alt-right, because...memes?

Ironically, screenshots of the most innocuous and least offensive posts from notoriously feral boards like /b/ now have their own home on a subreddit called r/greentext, or 'the realm of the most anti-climactic short stories from 4chan.' Many of the snippets featured on the sub collectively paint a more somber, tragic, and sometimes even wholesome picture of the 'anon' character. It's fascinating how the perception of an entire internet ecosystem can be manipulated by curating the content it produces. One could just as easily collect the most reprehensible posts from 4chan and suddenly 'anon' becomes an entirely unsympathetic character. In reality, 'anon' is millions of users—some malicious, some well-intentioned, all participating in an internet of anarchy that is difficult to define. We've collected some of the more harmless snapshots of /b/ via r/greentext, not to misrepresent the website, but instead to offer a small window into the insular world of 4chan to those who are mildly curious. 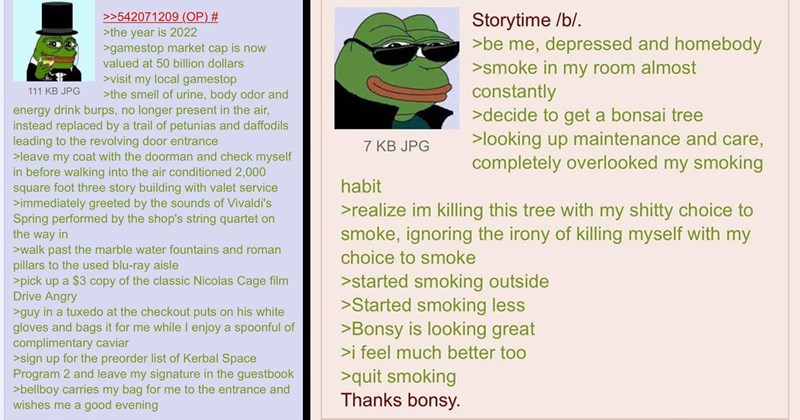