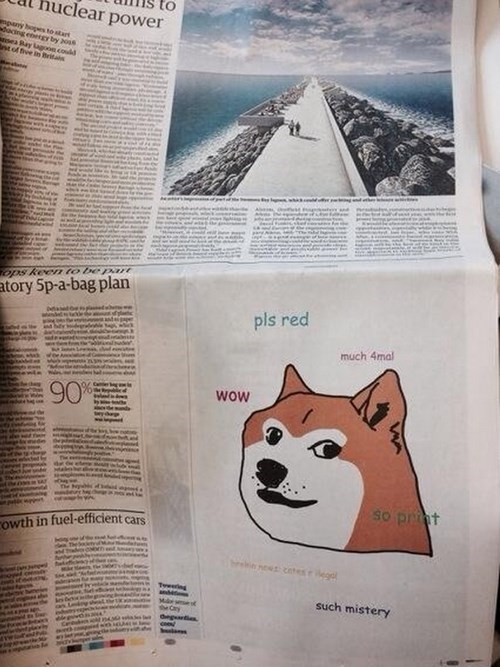 This was a quarter-page ad in today's issue of The Guardian. For a few hours, it was a mystery who the ad actually belonged to, but the newspaper revealed that it was a business and accounting information database called DueDil.

DueDil explained the ad in ad on their website, appropriately titled "wow. such reveal. many explain."

So a few of you might be wondering how doge made it into your nespaper this morning. Well… we admit it, it was us. But why, you may ask. Did we want to kill the meme by making it mainstream? Do we hate the internet? No. We actually thought we'd do something nice.

We'll be honest. We were having a hard time deciding which advert to run with our free advertising space the Guardian so kindly offered us for winning their Small Business Networks competition. We tried a traditional advert, which was nice, but then we remembered we're not a traditional kind of company. At DueDil we love seeing how small businesses use us to get the kind of information that's usually only available as an expensive subscription for larger companies, and that got us thinking. What if we could level the playing field a bit more by giving a small business exposure in a well respected national newspaper?

So that's what we're going to do. Enter your company in the draw by sending an email to wow@duedil.com with a brief explanation of what you would do with an advert in the Guardian, and the winner will get an ad running for 2 days in the business section (right in place of doge).

And of course we just wanted to print doge in the guardian, y'know, for the lulz.

Hope we brightened your morning,