The absolute mayhem at the Capitol yesterday has been on everyone's mind for the last 24 hours. It was scary. It was volatile. People died. Politicians are comparing the attack on democracy to memorable events like Pearl Harbor. Pundits are scrutinizing the actions of both sides, and everyone's realizing that 2021 ain't looking so sweet. While it's all very overwhelming, we do take solace in the fact that Twitter is able to take even situations like yesterday's insurrection and turn it into something funny. And that's exactly what @itsmeRachie did by asking the site to name a place with tighter security than the Capitol. Given the laughable lack of security (or perhaps competent security), the thread prompted scads of amusing jokes, with punchlines that not only cover places (Walmart, CVS) but objects that are famously tough to get into, like plastic cake boxes and clamshell packaging. The thread quickly went viral, and is still growing both in strength and hilarity. We put together some of our favorite responses, but by the time you read this we're sure there'll be more gold where these tweets came from. 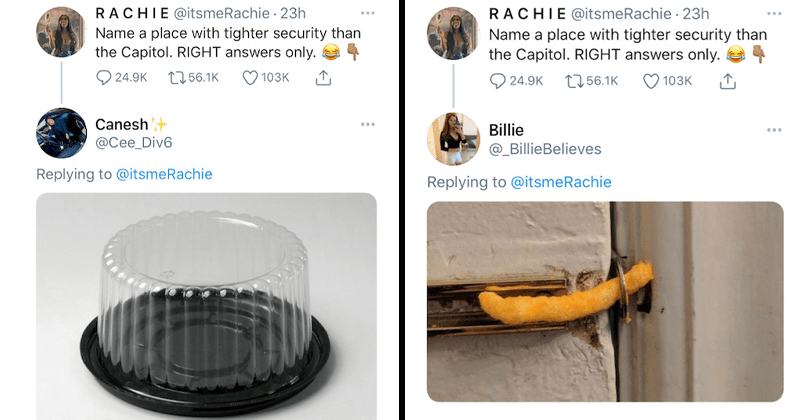