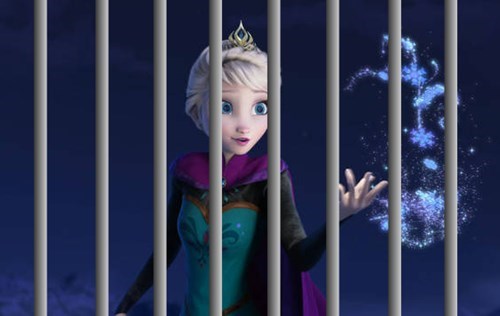 Do you wanna build a snowman, in jail?

The Harlan City Police Department in Kentucky issued an arrest warrant on Wednesday (via Facebook) for Queen Elsa from “Frozen,” blaming her on all the terrible weather.

All points bulletin!!! HPD has issued an arrest warrant for Queen Elsa of Arendelle. Suspect is a blonde female last seen wearing a long blue dress and is known to burst into song “Let it Go!” As you can see by the weather she is very dangerous. Do not attempt to apprehend her alone.

A few weeks ago, a police department in New Hampshire pulled a similar stunt, but targeting the famous groundhog Punxsutawney Phil who predicted 6 more weeks of winter.

The Harlan police have since gotten quite a bit of media attention and were a bit surprised.

“Wow. We were just having a little fun and didn’t expect this,” they said. “But as a reminder, do take the precautions you need to keep you, your friends, family, neighbors and pets safe during the snow queen’s mad spell.”

In all seriousness, the abnormally cold weather is starting to get really old Mother Nature.

Hopefully the CIA will be able to locate the evil mastermind soon and put an end to all of this nonsense.